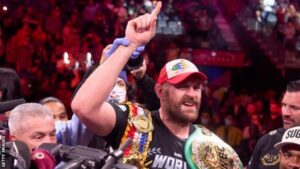 On Saturday night, Wembley Stadium will host one of the biggest all-British heavyweight dust-ups in history.

WBC and Ring Magazine champion Tyson Fury will look to strengthen his status as the best fighter in the division. Challenger Dillian Whyte will aim to shock the boxing world.

Hype for the clash has only really amped up over the past few days with Whyte – up until fight week – not participating in news conferences or promotional events.

The 34-year-old was aggrieved by his share of the purse, but the topic of who is earning what and the politics involved can now be put to bed, with the focus firmly on who will come out top.

Fury has won 31 bouts, with 22 knockouts, and drawn one as a professional. Whyte has won 28, with 19 stoppages, but has twice tasted defeat.

In a true tussle of the boxer versus the brawler, BBC Sport previews the blockbuster bout by speaking to both fighters, former heavyweight champions David Haye and Joseph Parker and boxing trainer Dave Coldwell.

Joe Bugner’s narrow victory over the popular Henry Cooper over 15 gruelling rounds at Wembley Arena in 1971 was watched by millions on terrestrial television, while 26,000 fans in Cardiff witnessed champion Lennox Lewis knock out national treasure Frank Bruno in 1993.

Both bouts are solid examples of all-British heavyweight clashes which captured the imagination of the general public but, on numbers alone, Fury-Whyte can stake its claim as the biggest.

A post-war European record of 94,000 fans will fill out Wembley Stadium, while the purse bids are the highest in boxing with Queensbury promoter Frank Warren successfully bidding $41m (£30.6m) to host the fight.

“I’m ready to rock and roll,” Whyte said at Thursday’s media conference. “It means everything to fight in my own country and for the world title.”

Fury, 33, added: “It speaks for itself. It’s the highest selling British fight in the history of our sport.”

Coldwell, who has been in Whyte’s corner in the past, believes Fury-Whyte is a bigger draw than Lewis-Bruno.

“Bruno was a big hero back then, like Tyson Fury is now,” he says. “But the Brits hadn’t yet taken to Lewis at the time of that fight.”

Whyte’s self-imposed silence had impacted the promotion of the fight. He did not appear at last month’s media conference which enabled Fury – ever the showman – to entertain reporters alone.

The challenger meanwhile kept a low profile while training out in Portugal. He landed in London on Monday and attended the pre-fight media conference on Wednesday.

After years of social media back and forth, it was expected that tempers may flare but Fury and Whyte, surprisingly, shared a great deal of mutual respect.

“He’s a decent bloke. A decent fella and he’s got good morals,” Fury said. “I’m not going to sit here and slate the fella because I’ve got nothing to slate him on.”

Whyte also did not dwell on any previous bad blood, saying: “He understands warrior code. He treated me with respect and I treated him with respect.”

The fight has been somewhat overshadowed by Fury’s links to Daniel Kinahan, who last week was among seven people hit with worldwide financial sanctions by the United States.

Fury had previously been advised by Kinahan but at the public workout insisted he has “absolutely zero” involvement with the Irishman, either in a business or advisory role and dismissed suggestions it has distracted his preparations.

“In my life I’ve got a massive man trying to punch my face in this week and I’ve got to deal with that so anything else is out of my control and nothing to do with me at all,” Fury said.

Whyte is a clear underdog but, as the boxing cliche goes, it only takes one punch in heavyweight boxing; and Whyte’s relentless style and vicious hooks pose danger to any opponent.

While Fury is undefeated in 32 bouts, Whyte lost to Anthony Joshua in 2015 and was then knocked out by a 40-year-old Alexander Povetkin in August 2020, only to avenge his defeat by the Russian seven months later.