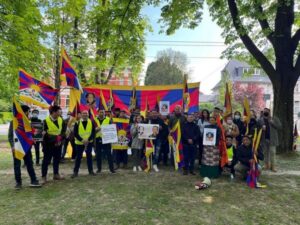 Brussels [Belgium], April 25 (ANI): Rights Group, International Campaign for Tibet, organized a protest in front of the Chinese Embassy in Brussels demanding the release of Panchen Lama and his family abducted by Beijing.

Brussels [Belgium], April 25 (ANI): Rights Group, International Campaign for Tibet, organized a protest in front of the Chinese Embassy in Brussels demanding the release of Panchen Lama and his family abducted by Beijing.

Panchen Lama was the prominent head of the Gelugpa sect, one of the major sects in Tibetan Buddhism and was abducted by the Chinese authorities when he was only a child and has been missing for 27 years.

The protests were organized from 1100 to 1200hrs in Brussels. Protestors carried posters asking about his whereabouts and calling him as world’s youngest political prisoner. Around 40 Tibetans showed up in the protests and chanted slogans against China. They said that despite China’s efforts, the abducted Lama will not be erased from the hearts of Tibetans.
On the occasion of the 33rd birthday of the 11th Panchen Lama Gedhun Choekyi Nyima, the department of information and international relations of the Central Tibetan Administration has also issued a statement demanding the release of Panchen Lama and his family.

After the death of the 10th Panchen Lama, Dalai Lama and his search party (in Tibet) started searching for the reincarnation of the Panchen Lama and finally on May 14, 1995, Gedhun Choekyi Nyima, a 6-year-old boy in Tibet was recognized as the 11th Panchen Lama, reported Tibet Rights Collective.

This selected reincarnation was also approved by Chadrel Rinpoche, who was not only a close disciple of the late 10th Panchen Lama but was also the Khenpo (abbot) of Tashi Lhunpo Monastery (the monastic seat of the Panchen Lama). However, things turned worst when the 6-year-old boy and his family were kidnapped on May 17.

For nearly 27 years, Tibetans have not seen their 11th Panchen Lama pictures. The Chinese officials have only given words to the world that Gedhun Choekyi Nyima and his family are doing well, reported Tibet Rights Collective.

Last Panchen Lama, the 10th Panchen Lama stayed back in the region after the revolt broke out between Tibet and Chinese officials. While he was in the region, he submitted a 70,000-word petition to the Chinese Communist Party (CCP) which led to his arrest.

Dalai Lama, another head of the Gelugpa sect, took shelter in India and garnered international support, and made the people of the world aware of the atrocious acts that were happening in Chinese occupied Tibet. (ANI)