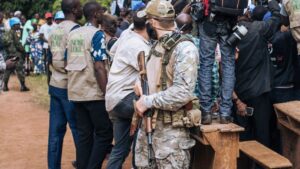 Russian mercenaries have been accused of summarily executing, torturing and beating civilians in the Central African Republic (CAR).

Most victims were put in a shallow hole by the road near Bossangoa, they said.

UN experts have also accused Russian mercenaries of committing systematic and grave human rights violations in CAR, which is one of the world’s poorest countries but is rich in diamonds, gold and uranium.

The Wagner Group is widely reported to have deployed forces elsewhere in Africa – in Mali and Libya – and has played a major role in the conflicts in Syria and Ukraine.

Last month, suspected Russian mercenaries were among those accused in a HRW report of executing about 300 people in central Mali.

This week, Russia’s Foreign Minister Sergei Lavrov reiterated Moscow’s official position that Wagner has nothing to do with the Russian state.

In its report, HRW says it has collected compelling evidence that Russian fighters have committed grave abuses against civilians in CAR with complete impunity since 2019.

Between February 2019 and November 2021, the campaign group interviewed 40 people, including 10 victims and 15 witnesses, about abuses by men speaking Russian.

The witnesses said that the men carried military-grade weapons and wore khaki clothes, scarves to cover their faces, military boots and sunglasses.

Twelve of those interviewed had witnessed the killings near the western town of Bossangoa on 21 July 2021, said HRW.

The unarmed young men who died had left Bossangoa on motorbikes shortly after 06:00 local time. They passed through a checkpoint to exit the town and they were later stopped at a roadblock about 12km (seven miles) outside Bossangoa on a road officials say was regularly patrolled by Russian fighters.

They were told to get off the bikes, put their hands over the head and hand over their phones.

According to HRW, between four and six Russian-speaking men then beat and kicked them as they lay on the ground. One by one, they were taken from the group, forced to kneel and shot in the head.

It said those watching started to pray out loud – and amid the noise and confusion, two of the captives managed to escape.

HRW also documented cases of detention and torture by Russian fighters in Bambari in 2019.

A shopkeeper who was detained on suspicion of being a rebel alleged his finger was cut off by his Russian captors in January 2019. (Courtesy BBC)