Brendon McCullum a contender to be new England Test coach 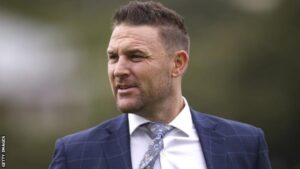 Former New Zealand captain Brendon McCullum has emerged as a contender to be England’s Test coach.

McCullum, 40, is interested in the job and has held talks with the England and Wales Cricket Board.

He is currently in charge of Indian Premier League side Kolkata Knight Riders.

England have advertised for separate Test and limited-overs coaches to replace Chris Silverwood, who left his role in February.

The deadline for applications was on Friday and interviews were held on Monday and Tuesday.

McCullum may have been seen as a better fit for the white-ball role – he is a close friend of England limited-overs captain Eoin Morgan – but he also played 100 Tests for New Zealand, and his time as captain was the beginning of a steady Black Caps improvement that eventually saw them crowned World Test Championship winners last year. (Courtesy BBC)