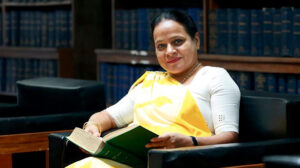 SJB Leader Sajith Premadasa said that Kavirathna, a strong activist of Women’s and Children’s rights will be their nominee for the post of Deputy Speaker.

Earlier, Prime Minister Ranil Wickremesinghe had proposed that a female MP be nominated for the post.

He had urged Parliament to reach a consensus on the appointment of a Deputy Speaker.