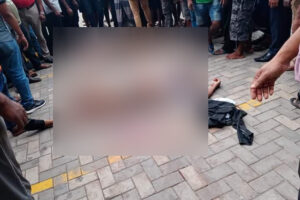 The media had reported that Amarakeerthi Athukorale had committed suicide on Monday after being confronted by violent mobs.

However, forensic reports revealed that Amarakeerthi Athukorale had been murdered.

His body and that of his security officer had been found stripped.

“The death of Hon. Amarakeerthi Athukorale was initially reported as a suicide, now however the medical examinations have proved otherwise. This begs the questions on what basis was it portrayed as a suicide? & who informed the media that is was a suicide?” former Minister Namal Rajapaksa tweeted.

Amarakeerthi Athukorala opened fire on people blocking his car’s path in Nittambuwa on Monday, after the country erupted into violence when a gang of Government loyalists attacked peaceful protesters at Galle Face.

Police had said that Athukorala had tried to take refuge in a building and shot himself after being surrounded by about 5,000 people. (Colombo Gazette)