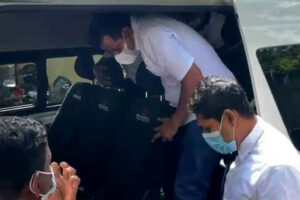 Two Sri Lanka Podujana Peramuna Parliamentarians, Sanath Nishantha and Milan Jayathilake, were today ordered to be remanded till 25th May over the attack on peaceful demonstrators near Temple Trees and Galle Face.

The Criminal Investigations Department (CID) had earlier informed Speaker Mahinda Yapa Abeywardena of a plan to question a number of MPs over the recent violence at Galle Face and near Temple Trees.

The Attorney General (AG) had directed the Inspector General of Police (IGP) to arrest the suspects, including Members of Parliament (MP), accused of being involved in the mob violence on 9th May.

The AG has told the IGP to arrest the MPs, including former Minister Johnston Fernando, if there is sufficient evidence against them.

Among the suspects named by the AG are MPs Johnston Fernando, Sanath Nishantha, Sanjeeva Edirimanne and Milan Jayatilleke as well as Senior DIG in charge of the Western Province, Deshabandu Tennakoon and Dan Priyasad. (Colombo Gazette)