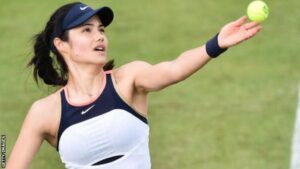 The WTA has followed the ATP’s lead in deciding ranking points will be awarded for next month’s UK grass-court events.

But Wimbledon could still be stripped of points in response to the All England Club and the LTA’s ban on Russian and Belarusian players following the invasion of Ukraine.

The decision is said to be finely balanced – with a verdict expected from both tours over the next few days.

Meanwhile, in his first interview since the ban was announced, LTA chief executive Scott Lloyd said the decision is the right one, and not discriminatory.

“I acknowledge the fact that it is a very complex matter and there’s a range of opinions, but given the circumstance that we are operating under in this country and public sentiment about Ukraine, I feel we have made the right decision,” Lloyd told BBC Sport.

“I don’t believe discriminatory is the right description here. We are necessarily needing to work within the framework of government guidance here in the UK.

“We, alongside a number of other sports, have come to the same conclusion – the likes of boxing, motor sport, athletics and the IOC.”

The ATP says the decision “undermines the ability for players of any nationality to enter tournaments based on merit” and is a violation of its rules.

The LTA could receive a significant fine, and if an especially harsh line is taken, the tournaments at The Queen’s Club and Eastbourne could even face suspension from the ATP Tour.

Both the LTA and the All England Club have detailed how “directional guidance” from the government influenced their decision.

The LTA has just received a £10.2m support package from Sport England, and Lloyd was open about the importance of funding from central government.

“Our partnership with Sport England and indeed the government is very important to tennis in this country,” he said.

“The government is going to invest some £22m in helping the LTA to restore park tennis facilities, which is very important for grassroots tennis.

“And of course we’ve got to remember that last summer tennis tournaments, and Wimbledon in particular, were one of the first sporting events to get back to some sense of normality post the Covid pandemic. That couldn’t have been done without the support and partnership of the government.”

The decision has, though, upset a lot of players, and there is a general feeling it could have been better communicated, and not simply presented as a fait accompli.

Removing points from tour events was ultimately considered less than ideal as it would have penalised those competing in the UK. Players have felt more strongly all along about withdrawing the points from Wimbledon, as it is the only real leverage the tours have.

Reaching a final decision remains complicated, and it is possible the ATP and the WTA will ultimately draw different conclusions.

And some players will be affected more than others. Last year’s Wimbledon points are still expected to disappear from the ATP rankings if points are removed this year.

Novak Djokovic would therefore not have the chance to defend the 2000 points he won on Centre Court last year, and whatever happens at Roland Garros, he would lose his number one ranking.

Lloyd did not want to comment on the WTA’s decision until it is officially announced.

But he did say he is comfortable having Lord Davies as the LTA chairman, even though he currently runs the private equity firm LetterOne, which was founded by the sanctioned Russian oligarch Mikhail Fridman.

Lloyd insists there are no double standards given the organisation’s stance on Ukraine.

“There is no doubt that Mervyn [Lord Davies] is absolutely in support of the UK government’s position on the war in Ukraine, and the actions he’s taken in respect of that company have been bold and strong,” he said.

“I understand his desire to want to save some 100,000 jobs or so which exist within those businesses.

“The position he has taken is effectively to expel any Russian interest from that business.” (Courtesy BBC)