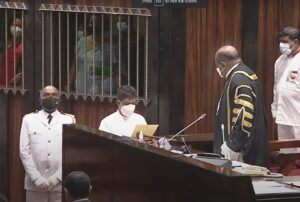 He took oaths to fill the seat made vacant following the death of Amarakeerthi Athukorala, who was killed in the Nittambuwa area on 9th of May.

Athukorala had reportedly opened fire on anti-Government demonstrators and fled with his security officer.

He was later found dead together with his security officer.

It was later reported that Amarakeerthi Athukorala had been murdered. (Colombo Gazette)