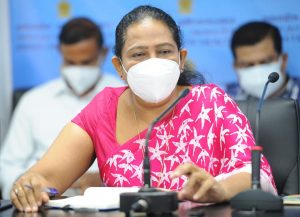 Her husband Kanchana Jayaratne was also questioned by the CID for several hours today.

Yesterday, parliamentarians Rohitha Abeygunawardena, C.B. Ratnayake and Sanjeewa Edirimanne were questioned by the CID over the Galle Face attack.

The Police said that the MPs were questioned over the mob attack on peaceful protesters at Galle Face and those gathered outside Temple Trees.

Two Sri Lanka Podujana Peramuna Parliamentarians, Sanath Nishantha and Milan Jayathilake, have already been remanded till 25th May over the attack on peaceful demonstrators near Temple Trees and Galle Face.

The Criminal Investigations Department (CID) had earlier informed Speaker Mahinda Yapa Abeywardena of a plan to question a number of MPs over the recent violence at Galle Face and near Temple Trees. (Colombo Gazette)