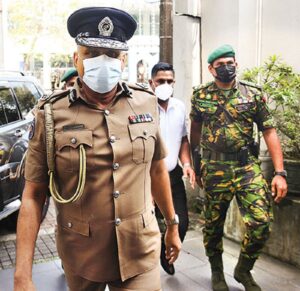 Inspector-General of Police C.D. Wickramaratne and the Commanding Officer of the STF, DIG Waruna Jayasundara, were questioned by the Criminal Investigations Department (CID) today.

They were questioned over the attack on peaceful protesters at Gall Face and Temple Trees on the 9th of May.

Former Minister Dr. Ramesh Pathirana had revealed last week that President Gotabaya Rajapaksa was informed that IGP Chandana D. Wickramaratne had given orders on 9th May not to block the mob heading to Galle Face to create chaos.

The MP told Parliament that Senior Police DIG in charge of the Western Province Deshabandu Tennakoon had informed the President over the telephone that the IGP instructed him not to block the mob heading to Galle Face.

Dr. Ramesh Pathirana said that he was at a meeting with the President on 9th May when he received a telephone call saying a mob was heading to Galle Face to create chaos.

The MP said that he had then informed the President about the latest developments.

The President had then telephoned Tennakoon and asked why he did not block the mob from heading to Galle Face.

Tennakoon had reportedly told the President that he received orders from the IGP not to block the mob.

Dr. Ramesh Pathirana said that the President had then insisted that action be taken to prevent any chaos from taking place.

The MP said that it was only then that the Police fired tear gas and water cannons on the mob, but the damage had already been done.

The mob attacked peaceful protesters at Galle Face and set fire to tents and other structures. (Colombo Gazette)