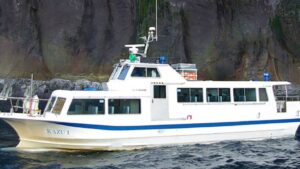 A tourist boat is missing off the northern Japanese island of Hokkaido, the country’s coast guard says.

Authorities lost contact with the vessel, which had 26 people on board, after it sent a distress signal saying it was taking on water at 13:15 local time (04:15 GMT) on Saturday.

Four people have since been found and have been taken for medical attention.

The boat, Kazu 1, is believed to have been on a three-hour sightseeing voyage around the Shiretoko Peninsula.

The area is a designated UNESCO world heritage site, and boat trips are popular with tourists hoping to spot whales and sea lions as well as brown bears on the rocky beaches.

The coast guard says it has dispatched patrol boats and police and military aircraft to find the vessel. Local fishing boats have also joined the search.

Kazu 1 was last heard from at around 15:00 local time when the crew said it was tipping at a 30-degree angle and starting to sink, according to Japanese media.

Of the 26 on board, two were crew and two were children.

Waves in the area had been high and local fishing boats had apparently decided to return to port by mid-morning.

The crew reportedly said that all those on board were wearing life jackets.

But temperatures in the area can dip as low as 0C (32F) when night falls. (Courtesy BBC)