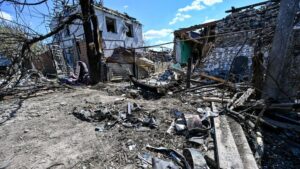 Two British volunteers providing humanitarian assistance in Ukraine have been captured by the Russian military, an aid organisation has said.

The non-profit Presidium Network said the men were detained at a checkpoint near the city of Zaporizhzhia in southern Ukraine on Monday.

The Foreign Office is said to be urgently seeking more information.

On Thursday, the government confirmed that one Briton had been killed in Ukraine and another was missing.

The two aid workers who were reportedly captured are believed to have been working independently, but were in touch with the Presidium Network.

They were said to be trying to rescue a family from a village south of Zaporizhzhia at the time of their capture.

Presidium Network’s founder, Dominic Byrne, told the BBC it had taken the men six hours of negotiation to get through the last Ukrainian checkpoint and into Russian territory, where they were detained.

Mr Byrne said he was making an appeal on behalf of the captured men “to get the support we need from the UK government and from the international community, as well as on the ground”.

He said he also wanted “to get clarification about how they are and how safe they are” and to know whether they were being “treated properly”.

Two other British men, Aiden Aslin, 28, and Shaun Pinner, 48, were captured earlier this month while fighting in the south-eastern city of Mariupol and shown on Russian state TV with apparent facial bruising. (Courtesy BBC)