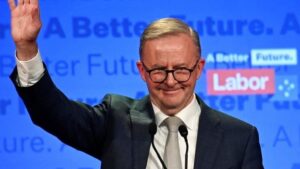 President Gotabaya Rajapaksa congratulated Albanese on his election saying the Sri Lanka Government of and he look forward to working closely with the new Prime Minister to maintain and further strengthen the bilateral ties between both nations.

Albanese told jubilant supporters that Australians had “voted for change”. However it is still unclear whether he can secure a majority.

The centre-left leader vowed to bring people together, invest in social services and “end the climate wars”.

Morrison thanked the “miracle of the Australian people” after conceding.

In perhaps the greatest twist, the election saw large support for Greens and independent candidates – many running on climate platforms. (Colombo Gazette / BBC)