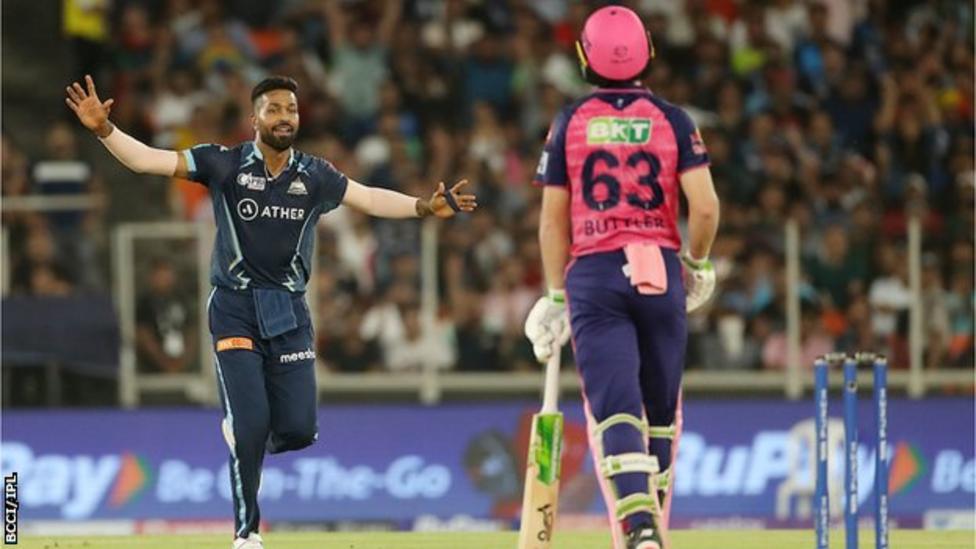 Hardik Pandya produced a magnificent all-round display as Gujarat Titans won the Indian Premier League in their first season with a seven-wicket victory over Rajasthan Royals.

Titans captain Pandya took 3-17, including the prize scalp of England’s Jos Buttler for 39 to restrict Royals to 130-9 and then hit 34 from 30 balls.

Shubman Gill top-scored with 45 not out and the India batter hit the first ball of the 18th over for six to win the match in front of a record crowd of almost 105,000 people in Ahmedabad.

The Titans triumph was built on a good draft: Mohammed Shami, Rashid Khan, Lockie Ferguson and Pandya combined to make up an excellent bowling attack, with batting power coming from Gill, David Miller and Matthew Wade.

But putting a group of talented players together does not automatically bring success, and Pandya has expertly led them from the front despite captaining in the IPL for the first time.

In the final, on the biggest stage, he took the three prize wickets of Buttler, opposing captain Sanju Samson and Shimron Hetmyer and rotated his bowlers perfectly.

He was well supported by one of the world’s best white-ball bowlers, Afghanistan’s Rashid Khan, who took 1-18.

And when the batting stuttered at 23-2, he stopped any threat of a complete collapse by calmly negating Royals’ bowling attack alongside Gill.

Although his side may not have secured the trophy, England’s Buttler finishes as the winner of the Orange Cap, awarded to the highest run-scorer.

He hit four centuries in amassing 863 runs in 17 innings to put him second behind India superstar Virat Kohli’s 973 on the list of most runs scored in a single IPL campaign.

While he was unable to replicate the fluency of his match-winning 106 not out that propelled his side into this final, his reputation as one of the world’s most destructive T20 batters has grown considerably.

Rajasthan leg-spinner Yuzvendra Chahal also finishes with the purple cap, awarded to the leading wicket-taker – a poignant tribute to the late great Shane Warne, who led the Royals to the IPL title in its first edition in 2008. (Courtesy BBC)