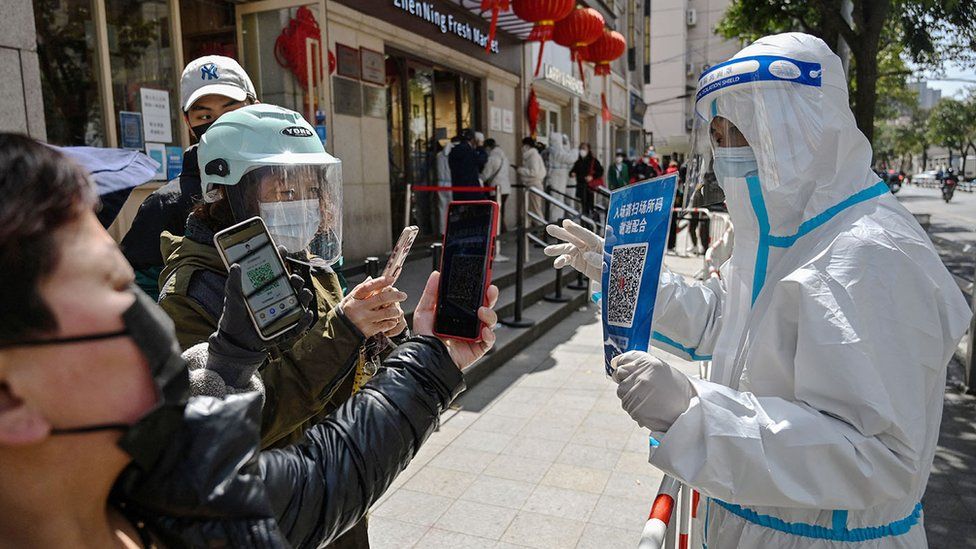 Authorities in the Chinese province of Henan are suspected to be restricting some residents’ movements using a Covid app, following rare protests.

Multiple people say they are being forced to quarantine, blocked from public transport or entering buildings.

Most appear to be customers of four rural banks which had run into issues providing cash withdrawals, report Chinese media outlets.

China’s banking and insurance regulator has since ordered an investigation into the banks.

More than 39 billion yuan (£5bn; $6bn) is believed to have been frozen, affecting hundreds of thousands of customers.

In many Chinese cities, residents use a “health code” app to enter buildings and shops, use public transport, or leave the city. Users must scan a QR code and show a colour-coded “health status” on their phone before entering.

If this status turns red, it indicates the person has tested positive for Covid recently or is suspected to have Covid, and must be quarantined for 14 days.

On Tuesday, some residents found their status had turned red when they tried to enter train stations, buildings, or hotels.

It is not known how many have been affected, but Chinese reports indicate that the issue has occurred in several towns and villages in Henan.

Customers of the four banks who travelled from other provinces to Henan’s capital city Zhengzhou have also encountered the same issue.

One bank customer in Zhengzhou told BBC Chinese her status was red even though she had never been in contact with a confirmed case, and her most recent tests showed she was negative.

She added that she was visited by health officials who asked her to stay at home and refused to explain why her status had suddenly turned red.

Some of those affected appear to be relatives of customers. One woman who lives in Zhumadian, a town 200km (124 miles) from Zhengzhou, said she was taken to a hotel for mandatory quarantine once her status turned red.

“I am not a customer, it’s my dad who deposited money in one of the banks and now he can’t get it out,” she told BBC Chinese.

“He recently went to Zhengzhou to understand the situation. Once he came back, his health status turned red. My whole family is now in quarantine after our statuses turned red.”

A staff member at the Zhengzhou health commission confirmed with BBC Chinese that many of the banks’ customers had run into the same problem.

“There is such a situation. At the moment, they can only contact their community managers to apply (to change their status). After they do two Covid tests within three days, their status can be changed back,” the staff member said.

The move has raised questions on Chinese social media where many have pointed out that this was a possible abuse of power by officials.

“If any area uses health codes to restrict people’s movements for other purposes, this is clearly a breach of pandemic prevention laws… and damages the support of the people for our fight against the virus,” he said.

Since then, thousands of customers have been travelling to Zhengzhou to attempt to withdraw their money. Small protests have erupted, culminating in a large demonstration on 23 May where thousands took to the streets, before police shut it down.

The China Banking and Insurance Regulatory Commission said last month that the major shareholder of the village banks, a company called Henan New Fortune, used third-party platforms or a money broker to take public funds. The company is suspected of financial crimes and authorities are currently investigating. (Courtesy BBC)

The Information and Communication Technology Agency (ICTA) today addressed what it called inaccurate news articles regarding the use of personal data collected to issue and manage the National Fuel Pass (NFP) system.

Director-General of Health Services confirmed 06 new coronavirus-related deaths for August 09. This brings the country s death toll from the pandemic to 16,603.