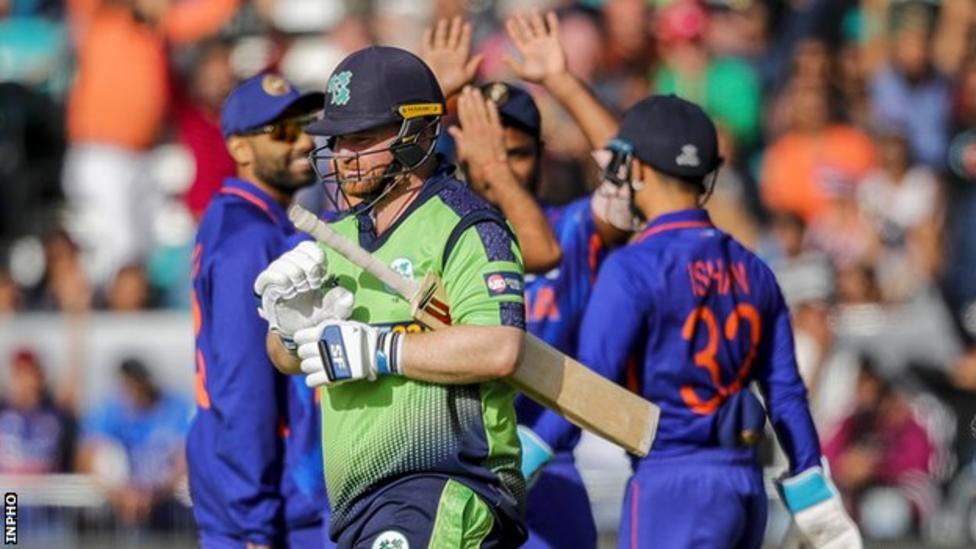 Ireland gave world number one side India a scare in the second Twenty20 but fell agonisingly short of a first victory over the tourists.

But the hosts gave chase with Andrew Balbirnie hitting 60 and Ireland needed six off the last ball for success.

India had eased to a seven-wicket triumph in Sunday’s opener at Malahide and they were expected to cruise to another victory at the Co Dublin venue after posting a big total.

Hooda was India’s batting star in the first T20 with an unbeaten 47 and he surpassed that with a brilliant effort alongside opener Samson.

The pair rattled along to post a new second-wicket best in international T20s, with Hooda smashing six maximums and nine boundaries in his 104 from 57 balls. Samson hit four sixes and nine fours in his 42-ball knock of 77.

Wickets fell quickly at the end of India’s innings with Adair taking 3-42, while Craig Young and Josh Little each chipped in with two wickets apiece.

Ireland’s top order struggled in the first T20, but openers Paul Stirling and Balbirnie returned to form to give the hosts hope of a shock.

Stirling was at his big-hitting best with 40 runs from 18 balls, before he was dismissed by spinner Ravi Bishnoi to leave Ireland on 72-1 after just 5.4 overs.

Gareth Delany was run out for a duck, but Balbirnie, after a slow start, ensured Ireland stayed on track by racking up seven sixes before holing out to Bishnoi.

Lorcan Tucker fell for five, but the in-form Harry Tector followed up his unbeaten 64 on Sunday with 39 valuable runs.

It was left to George Dockrell and Adair to chase the victory target and it came down to the final over with 17 runs required.

Umran Malik bowled a tight line and length to restrict the Irish duo and six was needed off the last ball for a famous win.

Adair connected, but the ball flew low to a boundary fielder – Ireland’s 221-5 was their second highest in T20s but it was not enough with India able to celebrate a narrow victory and series success. (Courtesy BBC)