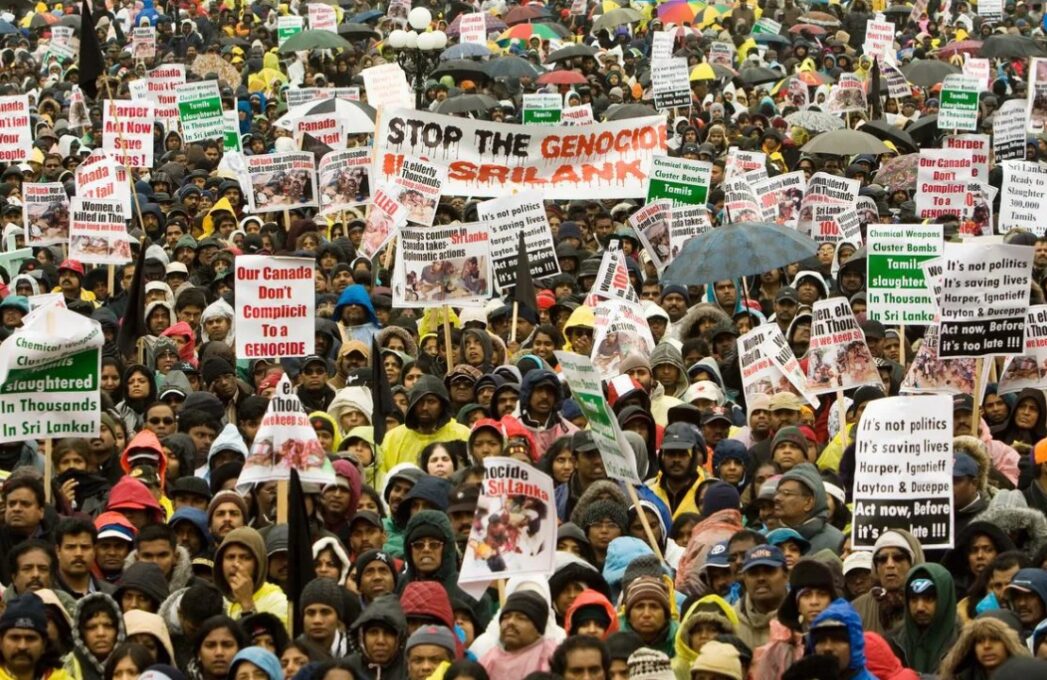 A Canadian court has dismissed a constitutional challenge over Ontario’s proclamation of Tamil Genocide Education Week — concluding that its purpose is purely “educative.”

In a case that cast a spotlight on tension between diasporas, several Sinhalese-Canadian groups took Ontario to court for designating the seven-day period each year ending May 18 — the date the Sri Lankan civil war ended in 2009 — to raise awareness of the Tamil genocide and other genocides in world history.

The Sinhalese applicants claimed that no Tamil genocide has been recognized under international law, arguing that the provincial government didn’t have the authority to adopt the term “genocide” and that the designation would promote hatred for one group over another.

In quashing the claim by the Sinhalese applicants, the Ontario Superior Court of Justice said the 26-year-old civil war ravaged Sri Lanka, but the fight has not ended.

“A new battle has emerged over who gets to write the history of the war,” wrote Justice Jasmine Akbarali in a ruling released Tuesday. “While this new battle does not intuitively seem like an issue for the Ontario Superior Court of Justice, it has in fact become one.”

The Tamil-Canadian diaspora welcomed the decision, saying education is one of the only ways available for the community to pursue justice and healing because the Sri Lanka government has been reluctant to recognize the atrocities and punish those responsible.

“Tamils across the province can now focus on what matters — commemorating and remembering the countless lives lost,” said Katpana Nagendra, a member of the Tamil Rights Group, one of the organizations granted intervener status in this case.

The Tamil Genocide Education Week Act, a private member’s bill tabled by Conservative MPP Vijay Thanigasalam, who is of Tamil descent, was passed unanimously in the Ontario legislature last year.

The preamble of the proclamation of the Tamil Genocide Education Week states that Tamil Ontarians have lost loved ones and have been physically or mentally traumatized by the genocide that the Sri Lankan state perpetrated against the Tamils during the civil war, which lasted from 1983 to the Tamil Tigers’ defeat in 2009.

Akbarali said the court heard evidence from “dueling” witnesses about the Sri Lankan civil war, and specifically, whether or not what occurred amounted to a genocide of Tamils.

“I am not deciding who bears the blame, or who bears more of the blame, for the tremendous suffering and trauma that occurred as a result of the Sri Lankan civil war,” the judge wrote in the 18-page decision.

“Nor am I deciding whether it was wise for the Ontario Legislature to pass the TGEWA. The wisdom of the legislation is a question that belongs solely to the Legislature, and more indirectly, to the voters of the province. The question before me relates only to the constitutionality of the TGEWA.”

While the court agreed with the claim that the proclamation recognizes a Tamil genocide, it said the act is in the spirit of educating the public about the event and other genocides to prevent such atrocities from occurring, and helping create an opportunity for Tamil Ontarians to share their stories and the intergenerational trauma the legislature has recognized.

“The TGEWA does not require any particular educational initiatives to be undertaken by any particular institution,” said Akbarali. “The dominant characteristic of the law is to educate the public about what the Ontario Legislature has concluded is a Tamil genocide.”

The province did not infringe on the federal jurisdiction in relation to the designation of genocide because the act didn’t contain a penalty or claim to determine that genocide has taken place “beyond a reasonable doubt.”

“The perpetrator of the genocide recognized by the Legislature is … to be the Sri Lankan government. A claim or a finding of genocide perpetrated by a government or a state does not tar individuals who may be members of the same nationality, ethnicity, or religious affiliation as those people who dominate the government or state,” said the court. (Courtesy The Star)