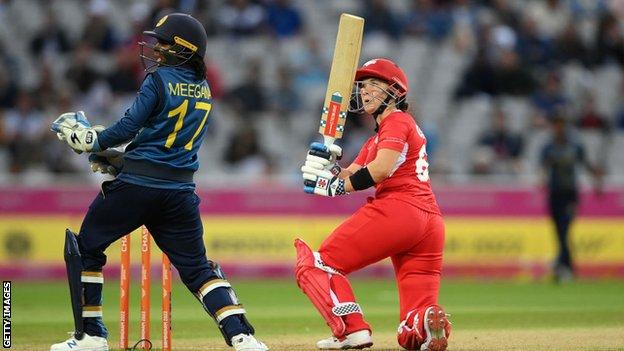 England swatted aside Sri Lanka as they overhauled a meagre total with 17 balls to spare in their opening Twenty20 match of the Commonwealth Games.

Spinner Sophie Ecclestone justified her ranking as the best T20 bowler in the world with three wickets to sap Sri Lanka of momentum.

The visitors washed up on 106-9 and England’s pursuit was swift and sure.

Teenager Alice Capsey’s 44 off 45 balls helped reel in the target as England won by five wickets.

The 17-year-old took to the pitch despite top-edging a ball into her face during the warm-up.

“She is very stubborn,” said skipper Nat Sciver. “Other people might not have wanted to continue, but it is hard to get her off the pitch.

“I have not seen an innings like that from her. I have seen the explosive side of her batting, but she was very calm and collected tonight.”

Overall it was an assured opening to the tournament for an England side who were without the leadership of usual captain Heather Knight, who missed the match with a lingering hip injury.

The inclusion of Capsey and fellow 17-year-old Freya Kemp, together with Knight’s absence, emphasised the youth of coach Lisa Keightley’s selection.

But the new generation proved well up to the task, dominating with both bat and ball to underline their credentials as title contenders.

After Sri Lanka chose to bat, England’s fast start with the ball came from a golden oldie rather than any of the whipper-snapping prospects.

Katherine Brunt, playing in her 100th T20 international, may have two decades on her youngest team-mates, but her competitive edge glinted as she tore in and trapped wide-eyed 16-year-old Sri Lanka opener Vishmi Gunaratne lbw with the very first delivery of the contest.

“My 100th ODI game was against India at Derby in 2017 and I had an absolute shocker, so I was keen not to repeat that experience,” said Brunt. “It can be a jinx, 100 caps, so it was nice to break that cycle.”

By the other end of the Sri Lankan innings, youth had taken the limelight.

The 20-year-old was rewarded with two wickets in the space of five balls. Nilakshi de Silva, who top-scored for Sri Lanka with 25, miscued high and handsome for Danni Wyatt to claim before Anushka Sanjeewani tickled a rising delivery behind to wicketkeeper Amy Jones.

Kemp picked up another pair of wickets after a successful debut against South Africa last week, dismissing captain Chamari Athapaththu for 10 with a ball that straightened off the seam and luring Kavisha Dilhari into a rash stroke.

Ecclestone, a relative veteran at 23, polished off the tail to finish with 3-25 after taking a sharp catch off her own bowling to end Hasini Perera’s innings.

England’s reply started at a canter.

Sophie Dunkley clobbered 17 runs off 16 balls before heaving across the line to give up her wicket to Oshadi Ranasinghe. Sciver also went for 17.

But, just as in the field, youth shone brightest.

Capsey, who scored 25 in her first international innings last week, played with flair and fine judgment, until missing a glance off her pads that would have brought up the winning runs.

It did not matter. Maia Bouchier duly did the job on the next ball, driving for four.

Earlier in the day, New Zealand and South Africa, ranked third and sixth in the world compared to Sri Lanka’s eighth, met in Group B’s other game. The White Ferns triumphed as South Africa fell 13 runs short of their 167-2.

Beyond the pool stages, Australia, who beat England in the World Cup final earlier this year, lurk as favourites to deny the hosts a gold on home soil. (Courtesy BBC)

President Ranil Wickremesinghe has pointed out that the industrial education and training opportunities in Sri Lanka should be improved by introducing modern technology required to surpass the new industrial technology and digital economy of the fourth and fifth industrial revolutions.