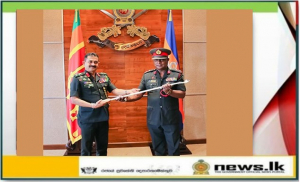 One of the senior Brigadiers serving the Sri Lanka Army Volunteer Force (SLAVF) who was just elevated to the rank of Major General had the privilege of receiving his new rank insignia from none other than their guiding chief, Lieutenant General Vikum Liyanage, Commander of the Army ( Augu-16) at the Commander’s office at the Army Headquarters.