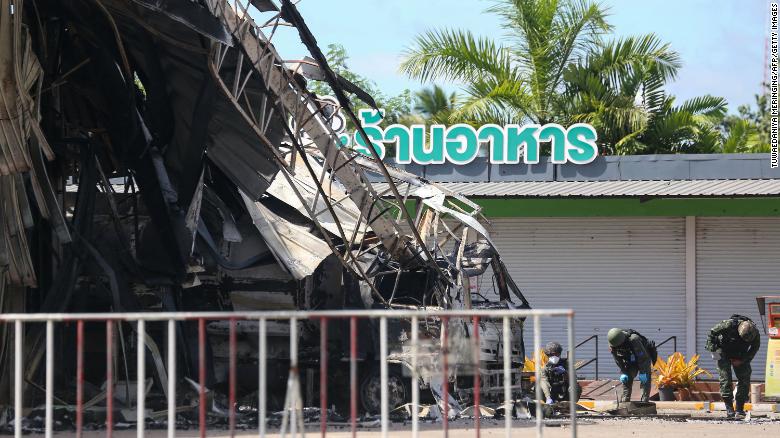 Explosions and fires ripped through at least 17 locations in southern Thailand on Wednesday, authorities said, in what appeared to be multiple coordinated attacks that injured seven people.

The bombings and arson attacks happened after midnight and targeted convenience stores and a gas station across three provinces, lightly injuring at least seven, according to police and military statements.

No one has claimed responsibility for the attacks so far.

Provinces in southern Thailand along the border with Malaysia have seen a decades-long, low-level insurgency, in which the Thai government has battled shadowy groups seeking independence for the predominantly Muslim provinces of Pattani, Yala, Narathiwat and parts of Songkhla.

More than 7,300 people have been killed in the conflict since 2004, according to the Deep South Watch group, which monitors the violence.

Peace talks that began in 2013 have faced repeated disruptions.

Wednesday’s attacks came after the Thai government earlier this year restarted discussions with the main insurgent group, the Barisan Revolusi Nasional, after a two-year hiatus due to the pandemic.

The Patani United Liberation Organisation (PULO), which was sidelined from the latest round of talks, carried out bombings during the holy Muslim month of Ramadan, claiming the dialogue is not inclusive. The government has said it is ready to talk to all groups.
The organization’s leader, Kasturi Makhota, told Reuters Wednesday’s attacks have “nothing to do with PULO.” (Courtesy CNN)

Sri Lanka’s Government appears increasingly upbeat about its chances of receiving International Monetary Fund board approval for a $2.9 billion bailout by December, but the multilateral lender has cautioned that the time frame remains uncertain, and much depends on discussions with the heavily indebted country’s creditors. Peter Breuer, senior mission chief for Sri Lanka, and […]

Sri Lanka today appealed to the creditors and stakeholders to help put the country back on the path of inclusive and sustainable economic growth. Addressing the 55th Annual Meeting of the ADB Board of Governors in the Philippines, President Ranil Wickremesinghe said that amidst major economic stress, Sri Lanka is undertaking an unprecedented fiscal effort […]

The Philippines and Sri Lanka are to further strengthen bilateral relations between both countries. President Ranil Wickremesinghe said that the long-standing friendship between Sri Lanka and the Philippines would be promoted by developing Asian regional cooperation. The President said this during his meeting with the President of the Philippines, Ferdinand R. Marcos Jr. in Manila […]

Video: CRYPTO | THIS IS WHY THE MARKETS ARE DOWN AGAIN TODAY!!!
Video: DO KWON'S STORY!!! | UNFAIR AND HIGHLY POLITICIZED??? | LUNA AND HNT
Video: CRYPTO | ANOTHER CRITICAL NEWS THAT COULD CRASH THE MARKETS TODAY!!!
Video: BITCOIN REACHES THE FIRESALE POINT!!! | DOGECOIN, ETHEREUM, AND AGE OF GODS
Video: DEFI | LACKS TRANSPARENCY AND REQUIRES REGULATIONS!!!
Video: DOLLAR'S RISE | TROUBLE FOR GLOBAL ECONOMIES!!!
Video: BITOIN IS CRASHING AGAIN | THESE COULD BE THE REASONS!!!