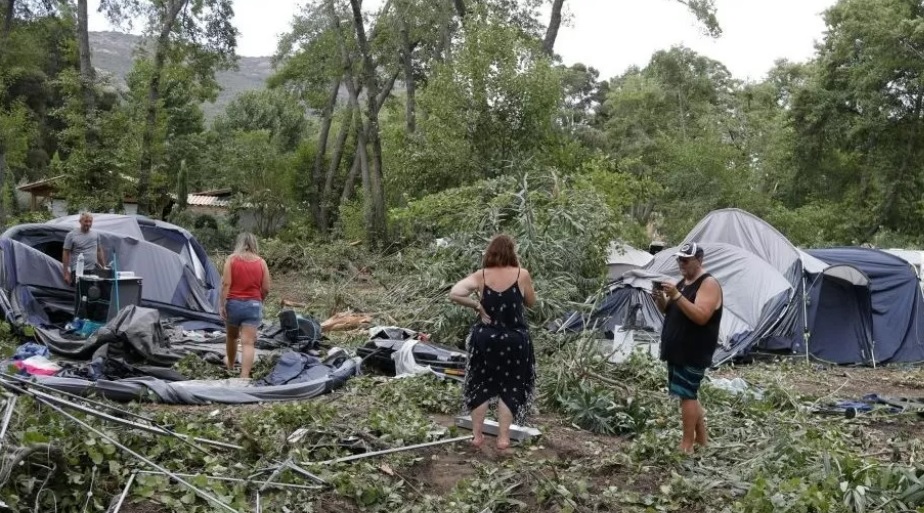 The deaths, most from falling trees, were reported in Italy and Austria, and on the French island of Corsica.

Heavy rain and winds wrecked campsites on the island, while in Venice, Italy, masonry was blown off the belltower of St Mark’s Basilica.

The storms follow weeks of heatwave and drought across much of the continent.

Authorities there said a 13-year-old girl was killed by a falling tree on a campsite.

A man died in a similar incident and a 72-year-old woman was killed when her car was hit by the detached roof of a beach hut.

Two other people, a fisherman and a female kayaker, died out at sea.

Interior Minister Gérald Darmanin, who arrived in Corsica on Thursday, said 20 people had been injured – four of them seriously.

Several campsites were evacuated on Thursday evening ahead of more expected damage.

A state of natural disaster could be declared, Mr Darmanin said. Extreme storms have become more frequent recently because of climate change.

Witnesses to the storms said they had been completely unexpected and no warning was given.

“We have never seen such huge storms as this, you would think it was a tropical storm,” restaurant owner Cedric Boell told Reuters news agency.

On the French mainland, some southern areas were hit by power cuts and streets were flooded in the country’s second city, Marseille.

In Austria two girls were killed by a falling tree near a lake in Carinthia.

Later, three more deaths were reported by media in Lower Austria province, also as a result of a falling tree.

Meanwhile in Italy, a man and a woman were killed by falling trees in separate incidents in the region of Tuscany.

Seaside resorts in Tuscany and further north in Liguria were damaged by the storms.

Tuscan regional leader Eugenio Giani posted a video of a ferris wheel spinning out of control in high winds at Piombino.

But in southern Italy, the heatwave continued, with temperatures of up to 40C recorded in Sicily.

And across the Mediterranean Sea in Algeria, at least 38 people have died in forest fires.

Many parts of Europe have seen weeks of exceptionally hot and dry weather.

Extreme weather events, including both heatwaves and storms, have become more intense and more frequent in recent years because of human-induced climate change.

The world has already warmed by about 1.1C since the industrial era began and temperatures will keep rising unless governments around the world make steep cuts to emissions. (Courtesy BBC)