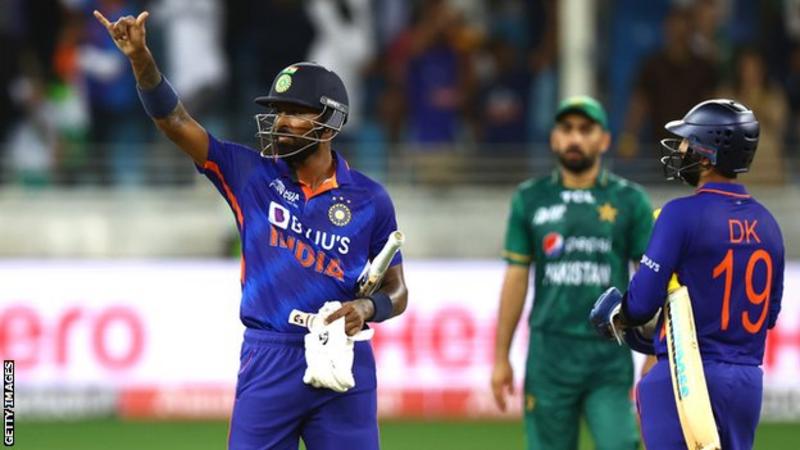 Hardik Pandya led India to a dramatic final-over win over Pakistan in the sides’ opening match of the Asia Cup.

With India chasing 148 from 20 overs, Hardik hit the fourth ball of the final over for six to seal a five-wicket win.

The all-rounder struck three fours in the 19th over to reduce the equation from 21 runs from 12 balls to seven from six, before Ravindra Jadeja was bowled at the start of the last over.

Virat Kohli also made 35 from 34 balls before he was caught off left-arm spinner Mohammad Nawaz, who took 3-33 and bowled the final over in Dubai.

After Jadeja fell for 35, new batter Dinesh Karthik took a single and Nawaz bowled a dot ball but, with six needed from three, Hardik cleared the long-on boundary.

Mohammad Rizwan top-scored with 43 from 42 balls for Pakistan, while India seamer Bhuvneshwar Kumar took 4-26 as Babar Azam’s side were dismissed in 19.5 overs.

It was the great rivals’ first meeting since the T20 World Cup last autumn, an encounter Pakistan won by 10 wickets.

The win puts India top of Group A in the Asia Cup – which is being played in the Twenty20 format in this edition – above Pakistan and Hong Kong. Afghanistan thrashed Sri Lanka in the Group B opener on Saturday – a group which also includes Bangladesh.

The top two teams in each group go into the Super Four phase, which is then played in a round-robin format before the top two meet in the final on 11 September. (Courtesy BBC)