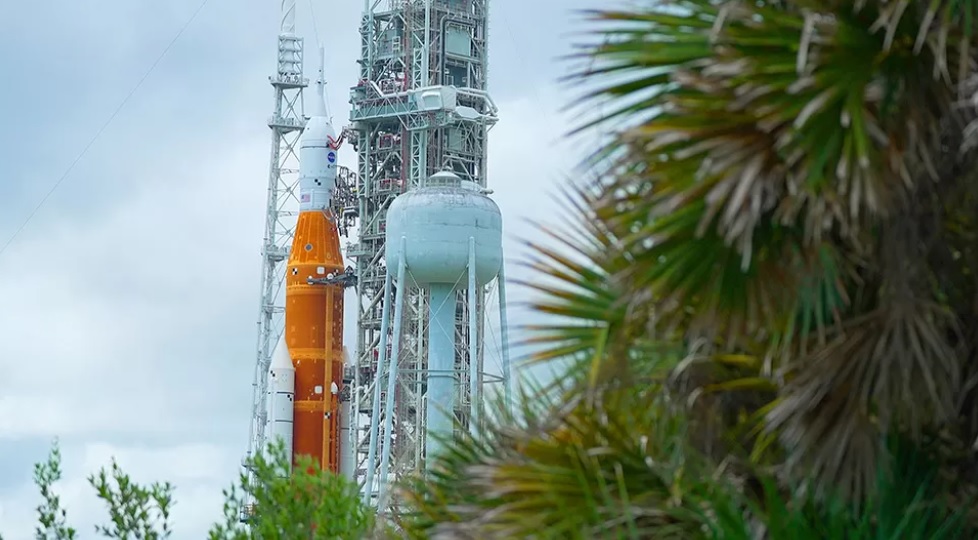 The launch of Nasa’s new Artemis I Moon rocket is facing a potentially lengthy delay after a second postponement.

Controllers tried and failed again on Saturday to get the Space Launch System (SLS) vehicle to lift off. They were thwarted by a fuel leak.

Engineers now want to inspect the rocket, and any repairs may need to happen in the workshop rather than on the launch pad.

The whole process is certain to lead to a setback of several weeks.

It means we may not see a third launch attempt before mid-October at the earliest.

The SLS is the most powerful rocket ever developed by the US space agency, and is designed to send astronauts and their equipment back to the Moon after an absence of 50 years.

Much of the enormous thrust comes from burning almost three million litres of super-cold liquid hydrogen and oxygen in four big engines on the vehicle’s underside.

But when controllers sent the command early on Saturday morning to fill the rocket’s hydrogen tank, an alarm went off, indicating there was a leak.

The problem was traced to the connection where the hydrogen was being pumped into the vehicle.

Controllers tried a number of fixes, including allowing the hardware to warm up for short periods to reset the seal, but they were not successful.

The Artemis I mission is uncrewed, but Nasa’s Artemis mission manager Mike Sarafin said the rocket’s future role in human spaceflight meant extreme care was still required in its operation.

His boss, Nasa Administrator Bill Nelson, agreed: “I look at this as a part of our space programme, of which safety is the top of the list.”

The leaky seal on the SLS could conceivably be fixed on the launch pad. But there are batteries in the termination system used to destroy the rocket in the event of a wayward launch that will require recertification beyond this coming week, and this can only be done in the workshop.

Rolling the vehicle back to the engineering building makes a third lift-off attempt before mid-October unlikely.

“In order to test our batteries, change out the batteries, we have to roll back,” said Jim Free, Nasa’s associate administrator for exploration systems development.

The 100m-tall vehicle’s objective is to hurl a human-rated capsule, called Orion, in the direction of the Moon, something that hasn’t happened since Project Apollo ended in 1972.

Nasa had first tried to launch the rocket on Monday. That attempt was waved off when controllers couldn’t be sure the four big engines at the base of the core-stage were at the correct operating temperature.

Frustratingly, subsequent analysis indicated that a sensor was almost certainly outputting inaccurate readings. The power units, in all probability, were in absolutely the right condition to go fly.

When the SLS does get away, it is sure to be a spectacular sight.

“It’s gonna be ‘shuttle on steroids’,” said Doug Hurley, who was the pilot on the very last shuttle mission in 2011.

The former astronaut now works for Northrop Grumman who make the big white solid boosters on the sides of the SLS.

“What I always thought was the coolest thing about shuttle launches was you saw it lift off and it was well clear of the tower before you heard anything, and then it was even a little longer before you felt it,” he explained.

“Thrust to weight-wise, SLS is pretty close to what shuttle was. Apollo’s Saturn V rocket was drastically different. I never saw it in person but it lumbered clear of the pad. For shuttle, it seemed like it was clear in an instant, almost as soon as the boosters were lit. SLS should be the same,” he told BBC News. (Courtesy BBC)