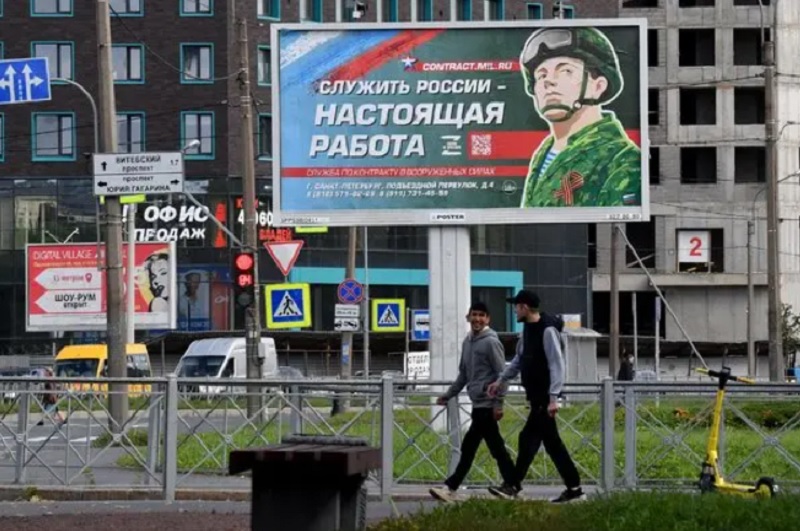 Russian men are attempting to leave the country to avoid a military call-up for the Ukraine war.

Queues have formed at border crossings since President Vladimir Putin announced a partial military mobilisation on Wednesday, which could see 300,000 people summoned to fight.

The Kremlin says reports of fighting-age men fleeing are exaggerated.

But on the border with Georgia, miles-long queues of vehicles have formed including men trying to escape the war.

One man, who did not want to be named, told the BBC’s Rayhan Demytrie he had grabbed his passport and headed to the border, without packing anything else, immediately after President’ Putin’s announcement – because he fell into the group that could potentially be sent to the war.

Some witnesses estimated the queue of cars at the Upper Lars checkpoint to be some 5km (3 miles) long, while another group said it had taken seven hours to get across the border. Video from the scene showed some drivers leaving their cars or trucks temporarily in standstill traffic.

Georgia is one of the few neighbouring countries that Russians can enter without needing to apply for a visa. Finland, which shares a 1,300km (800 mile) border with Russia, does require a visa for travel, and also reported an increase in traffic overnight – but said it was at a manageable level.

Other destinations reachable by air – such as Istanbul, Belgrade or Dubai – have seen ticket prices skyrocket immediately after the military call-up was announced, with some destinations sold out completely. Turkish media have reported a large spike in one-way ticket sales, while remaining flights to non-visa destinations can cost thousands of euros.

Germany’s interior minister signalled on Thursday that Russians fleeing the draft would be welcome in her country.

“This is not a fair reflection of the people’s will. This is heavy lobbying. This is geopolitics,” he said.

At least 17 students of a school in the Pelwatte area of Buttala have been admitted to Wellawaya Base Hospital due to suspected food poisoning.

The charges applicable on Telecommunication and Pay TV services have been revised effective from today (Oct. 05), instead of the recovery of the Social Security Contribution Levy (SSCL) of 2.5% introduced by the SSCL Act.

Leader of the Opposition, Sajith Premadasa today requested the government to arrange for the release of Inter-University Students Federation (IUSF) convenor Wasantha Mudalige and the two others who are detained under the Prevention of Terrorism Act (PTA).

[…]The post The Legitimacy Of Law – Questioning The PSO & PTA appeared first on Colombo Telegraph.

[…]The post Futility Of “Ranilnomics” Without Systemic Change appeared first on Colombo Telegraph.