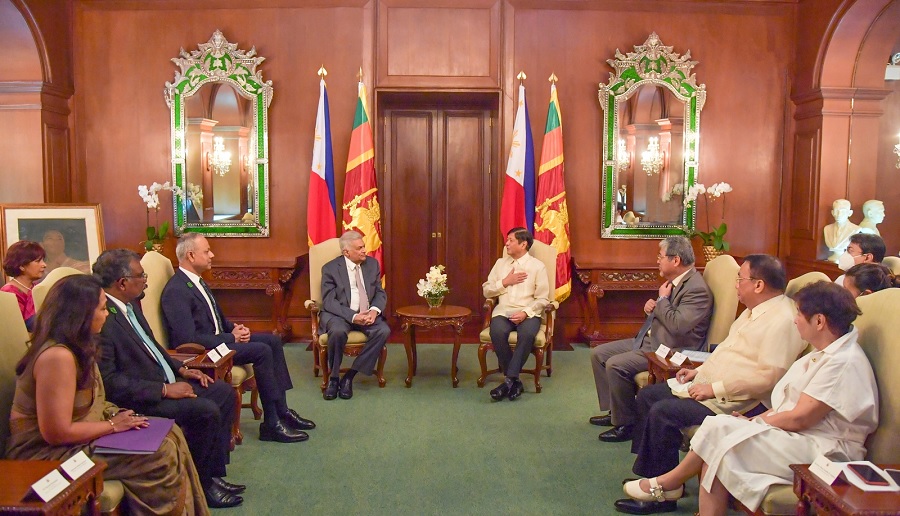 The Philippines and Sri Lanka are to further strengthen bilateral relations between both countries.

President Ranil Wickremesinghe said that the long-standing friendship between Sri Lanka and the Philippines would be promoted by developing Asian regional cooperation.

The President said this during his meeting with the President of the Philippines, Ferdinand R. Marcos Jr. in Manila today.

The Philippine President accorded a rousing welcome to President Wickremesinghe upon his arrival at the Malacanang Palace.

During this discussion, greater emphasis was placed on further strengthening the longstanding bilateral relations between Sri Lanka and the Philippines through new approaches, the President’s Media Division said.

Senior Adviser to the President on National Security and Chief of the Presidential Staff Sagala Ratnayake, Secretary to the Ministry of Finance Mahinda Siriwardena, Sri Lankan Ambassador to the Philippines Shobini Gunasekera and the Sri Lankan delegation were present on this occasion. (Colombo Gazette)

The Indian authorities are seeking consular access from the Qatari government to eight former naval officers who were detained in Doha, Ministry of External Affairs Spokesperson Arindam Bagchi said. “Yes, this issue is something that we have been pursuing and talked about it earlier. Our embassy in Doha has been regularly raising the issue with […]

By N Sathiya Moorthy Talking to newsmen in Colombo recently, former President Chandrika Bandaranaike Kumaratunga, CBK, said that the nation demanded a ‘radical system-change’ and voters much elect someone who can do it. In context, she referred to the hugely successful Aragalaya protests earlier in the year and pointed out how they were unprecedented and […]

Former Director of the Department of Agriculture, K.B. Gunaratne says that there is a risk of the upcoming ÂMaha SeasonÂ being unsuccessful as a result of substandard pesticides received by the farmers through illegal means.

Police have arrested eight individuals along with drugs including ecstasy pills during a party which was organized through Facebook at the Weligama Beach in the Weligama Police Division.