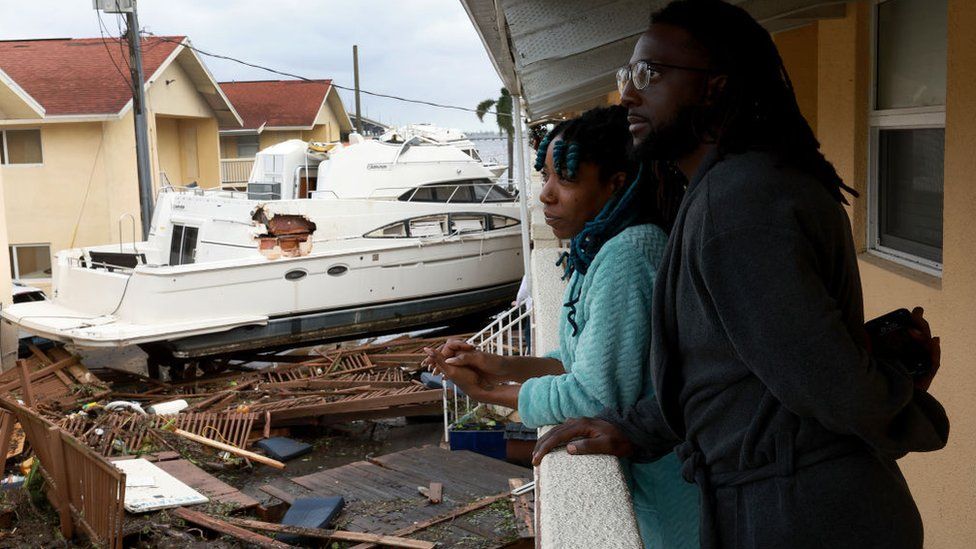 A huge search and rescue effort is continuing in Florida in the aftermath of Hurricane Ian, which cut a swathe of destruction across the US state.

At least 10 people have died in the state but officials fear the confirmed toll could rise considerably.

Joe Biden has warned the category one storm could be the deadliest hurricane in Florida’s history, with a “substantial loss of life”.

Ian is now moving inland and heading towards North and South Carolina.

A blackout is still affecting some 2.2 million Florida homes and businesses.

The flood waters have been so severe they have trapped some people in their homes, officials said, with the National Guard going door to door in the city of Orlando to rescue those stranded.

The 10 deaths that have have been confirmed were all in the south-west Charlotte County, which saw intense winds.

Joseph Tiseo, a local commissioner, told the BBC the area had a “tremendous wind event that lasted for 12 hours straight… it was brutal”.

He said said it was not yet clear how many of the deaths were a direct result of the hurricane.

A little further south, Lee County took the brunt of the storm surge.

The state’s Governor Ron DeSantis told a news conference on Thursday evening that the damage in Fort Myers, a harbourside city there, was “almost indescribable”.

“To see a house just sitting in the middle of Estero Bay, literally must have gotten picked up, flown because of the massive wind speed and the storm surge and deposited in a body of water,” he said.

“I would say the most significant damage that I saw was on Ford Myers Beach, some of the homes were wiped out, some of its was just concrete slabs”

One woman who lost her home said the experience is “numbing” and has her feeling “overwhelmed”.

“It’s not my first hurricane but it’s my first total loss,” Karen, who lives on San Carlos Island in Fort Myers told Reuters.

Some residents had to swim out of their homes.

“You have to either swim or drown,” an Orlando woman told CBS News, the BBC’s partner in the US.

A woman in Fort Myers, who swam to safety when her ground floor apartment began to flood, said when she returned home she “had to wait about five minutes for all the floodwaters to come out”.

And at the Sun Seekers mobile home park in North Fort Myers, residents recounted their terror as they tried to protect themselves with blankets.

“It was terrifying, because you’re helpless”, one of the residents, Kim said. “We had no [phone] service to call anyone, but no one would have come anyway.”

At the governor’s briefing, Kevin Guthrie, director at the Florida Division of Emergency Management warned about “indirect deaths” – the fatalities that can happen after a storm system has passed.

He warned homeowners to watch out for power lines mixed in trees and said no one should be tinkering with generator sand chainsaws, or climbing ladders without proper training.

Some parts of Naples, a seaside city south of Fort Myers, have been rendered a dark and deserted ghost town, and the city’s iconic pier has been smashed in half.

The BBC’s Bernd Debusmann, who is reporting from Naples, says a concession stand – which just days ago marked the halfway point on the pier – now stands precariously over the water, with splintered pieces of wood hanging off.

About a block from the beachfront, some roads remain impassable and underwater, while others have been left covered in mud as the slowly water recedes. (Courtesy BBC)