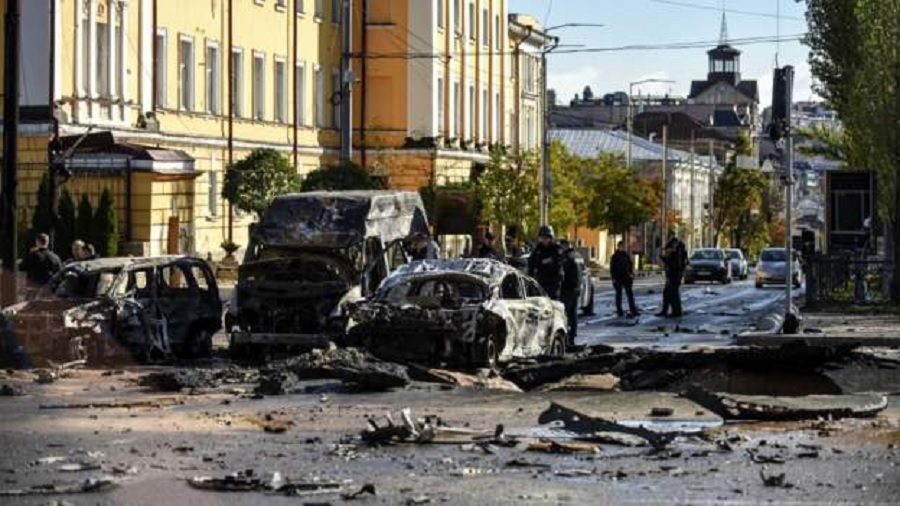 The past few hours have seen wave after wave of explosions, not just in Kyiv, but all across Ukraine, from Lviv in the west to Kharkiv in the east and Odesa in the south.

For those of us who were here when Russia’s full-scale invasion began in February, there’s an element of déjà vu. We’ve been told to spend as much time as we can in the basement, as further attacks, using missiles and drones, are expected.

But this is also different. The explosions here in Kyiv are much closer to the centre. Not distant thumps from the suburbs, but loud reverberations close to streets and locations we’ve come to know well in the past eight months.

It’s difficult to tell what is being targeted, but a statement from Ukraine’s ministry of culture said museums and the Philharmonic building had been hit.

One video circulating on social media showed a huge crater in a children’s playground.

Another showed a missile slamming into Mayor Vitali Klitschko’s glass bridge, a popular tourist spot and viewpoint above the Dnipro River.

Olena and Valerii Badakh live in an apartment overlooking the playground in Shevchenko Park.

“It was horrifying. In an instant, there appeared a hole in our life. It was terrible,” Olena told me.

“I spent my entire life here. I went to school here. Cleaned the park, sowed grass. My son, and now my grandson grew up here,” said her husband Valerii. “There are always so many kids here.

“I think they wanted to hit the university building and the monument to Hrushevsky. Those are important symbols for us, it was a symbolic attack.”

Symbolic targets? It’s hard, this early, to discern the logic. But reports from elsewhere speak of a thermal power plant being hit in Lviv. President Volodymyr Zelensky says energy facilities are being hit all over the country.

It’s been a long time since so many cities were targeted at the same time. Moscow was apparently determined to make the biggest possible statement.

Two days ago, social media was flooded with videos and memes as Ukrainians wildly celebrated the attack on the bridge linking Russia with the Crimean Peninsula.

Today, the videos are all of shell-shocked residents, fiery debris and urgent warnings. Any sense of euphoria is gone.

It feels inevitable, but that doesn’t lessen the shock. Fear is once again stalking the capital. (Courtesy BBC)