West Indies knocked out of the T20 World Cup 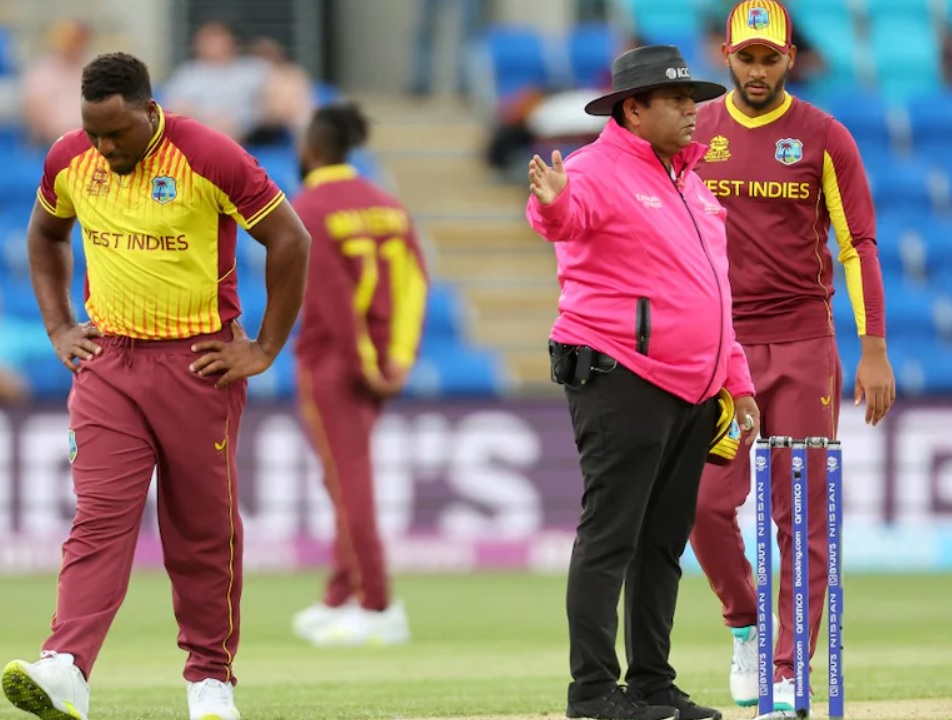 Brilliant Ireland advanced in the T20 World Cup by dumping out two-time champions West Indies with a nine-wicket victory in Hobart.

In a winner-take-all final match of the group stage, Ireland coasted a pursuit of 147 with 15 balls to spare.

Paul Stirling added a whirlwind 73 with captain Andy Balbirnie for the first wicket and ended on 66 not out.

How much this result can be classed as a shock is debatable – West Indies are far from the force that won the title in 2012 and 2016 and lost to Scotland in their opening match on Monday, while Ireland are a Test nation in their own right.

But it is still another famous win at a global tournament for the Irish, who finish second in Group B and move on to Group One of the Super 12s, alongside hosts Australia, England, New Zealand, Sri Lanka and Afghanistan.

They will play England in Melbourne on Wednesday (05:00 BST), the first time the two sides have met in a global event since the Irish pulled off a stunning upset at the 2011 50-over World Cup.

Ireland’s reputation for claiming scalps at major events had been on the wane – they have not made it through the first stage of a T20 World Cup since 2009 and did not qualify for the 2019 50-over tournament.

Indeed, they were on the brink of an early exit three-quarters of the way through Wednesday’s game against Scotland, only for a blistering turnaround to set up this high-stakes encounter with West Indies.

From the moment West Indies won the toss and elected to bat, Ireland were the superior side.

The bowlers rarely erred, with the spinners in particular choking West Indies in the middle overs. Off-spinner Simi Singh supported Delany by sneaking 1-11 from two overs, and it was all backed up by some faultless fielding.

The Windies gained momentum by clubbing 34 from the final three overs, but Stirling and Balbirnie made a rapid start to the chase with some free-flowing strokeplay.

At 64-0 at the end of the six-over powerplay, the game felt as good as done.

Although Balbirnie chopped left-arm spinner Akeal Hosein to point for 37, Stirling found another ally in Lorcan Tucker in an unbroken stand of 77.

Tucker ended on 45, hitting the winning runs to the delight of some passionate Irish fans at the Bellerive Oval.

This is an awful result for West Indies, who will not feature in the main phase of a T20 World Cup for the first time.

They were in poor form going into the World Cup and were in disarray before the tournament started as batter Shimron Hetmyer was dropped from the squad for missing his flight to Australia.

Even though long-time T20 stars like Chris Gayle, Kieron Pollard and Dwayne Bravo have moved on, the Windies can still call upon plenty of players with extensive franchise experience across the globe.

They should have been favourites to advance from the group, but instead exit because of losses to Scotland and the Irish.

West Indies would have been further outclassed had it not been for an unbeaten 62 from Brandon King. Odean Smith, with 19 not out from 12 balls, added late impetus, yet the feeling was the Windies did not have enough runs.

So it proved as Stirling and Balbirnie tucked into some wayward bowling. When Tucker was caught and bowled off a Smith no-ball on 17, it typified a dismal display and West Indies’ last chance was gone. (BBC)

colombogazette.com - West Indies knocked out of the T20 World Cup