England stunned by Ireland as rain results in five-run defeat 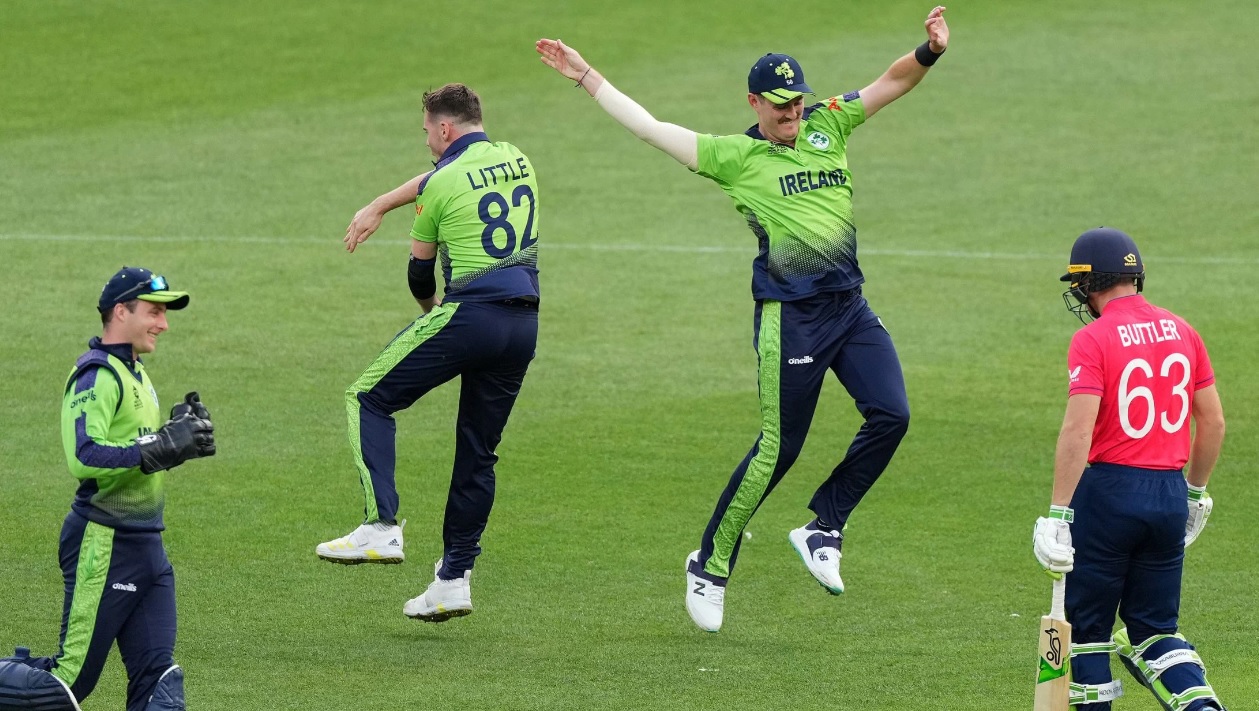 England suffered a major upset in the Men’s T20 World Cup as an inspired Ireland and rain seriously dented their title hopes in Melbourne.

After a surprisingly meek performance in pursuit of 158, England, one of the tournament favourites, were 105-5 in the 15th over when rain arrived.

With England behind the required rate, Ireland secured a five-run win on the Duckworth-Lewis-Stern method when the match was called off soon after.

The result does not end England’s hopes of progressing from Group 1 but it leaves them likely needing to beat Australia, New Zealand and Sri Lanka in their remaining games to go through.

After slipping to 86-5, the rain came just as Moeen Ali had begun to wrestle some momentum back for England by striking 12 in three balls.

But it proved too little too late, England left ruing their top-order collapse before they return to the Melbourne Cricket Ground for what is now a crucial match against holders Australia on Friday at 09:00 BST.

Ireland face Afghanistan at 05:00 on the same day at the same venue.

Wednesday’s later game between New Zealand and Afghanistan at the MCG was abandoned without a ball being bowled because of rain. The Black Caps top the group on three points, with Sri Lanka, England, Ireland and Australia all a point behind.

The timing of the rain was unfortunate – one more ball and a Moeen six would have taken his side ahead of the score required.

England, though, can have few complaints. Their performance was below-par with both bat and ball.

Ireland have done this before, famously they beat England in Bangalore in the 50-over World Cup of 2011, but they are the second-lowest ranked team left in this competition.

England’s tactics with the bat were curious.

Having lost captain Jos Buttler for a duck to the second ball of the chase, they struggled to find any timing – hitting only eight boundaries in 87 balls.

With the required rate up around 10 runs per over, they looked to take on the long MCG boundaries, with Harry Brook caught off the spin of George Dockrell on the mid-wicket fence.

All of this came after they had managed to peg their opponents back following a wayward start in which they allowed the men in green to race to 102-1 off 12 overs.

England inflicted a collapse of 9-54 to dismiss Ireland in the final over, giving them what looked a manageable chase, but now their hopes of a second T20 world title are in real jeopardy.

Friday’s encounter against Australia, who lost to New Zealand in their opener before beating Sri Lanka, is effectively a knockout game.

Buttler pointed to the first 10 overs of the match as the reason for the defeat while admitting they were still favourites at halfway.

He was caught behind driving left-armer Josh Little, who then had Alex Hales caught at short fine leg when the opener skied a pull shot.

Ben Stokes’ struggles continued as he made six from eight balls before being bowled by an inswinger from Fionn Hand.

Dawid Malan’s innings summed up England’s stodginess. He lasted 37 balls for his 35 but rarely timed a shot well.

Ireland bowled accurately throughout, showing England the way, and capitalised on swing and seam brought to life by rain before the game.

Only Moeen found his rhythm – he had 24 from 12 balls when the rain came, including the innings’ one six when launching leg-spinner Gareth Delany down the ground.

In those first 10 overs, which were interrupted by another shower, England offered Ireland far too much width and were put to the sword.

After the early loss of Paul Stirling, Ireland skipper Andrew Balbirnie, who made a superb 62 off 47, and Lorcan Tucker put on 82 together – Chris Woakes in particular punished, conceding 41 from three wayward overs.

Tucker brilliantly ramped Woakes over short fine leg and hit a glorious drive off Sam Curran over the mid-on rope.

“The first 10 overs we were a bit flat, we lacked intensity,” said England fast bowler Mark Wood. “We weren’t at our best.”

It took a stroke of fortune to break the stand, Tucker run out at the non-striker’s end when Balbirnie’s push was glanced onto the stumps by the hands of bowler Adil Rashid.

Wood took three wickets for 3-34, bouncing out Stirling and Curtis Campher with his searing pace. Only spinner Liam Livingstone, who took 3-17, Stokes and Rashid were able to stem the scoring.

Curran closed out the innings with two late wickets, bowling both Barry McCarthy and Hand, but his three overs still cost 31.  (Courtesy BBC)