At least 60 killed after suspension bridge in Gujarat collapsed 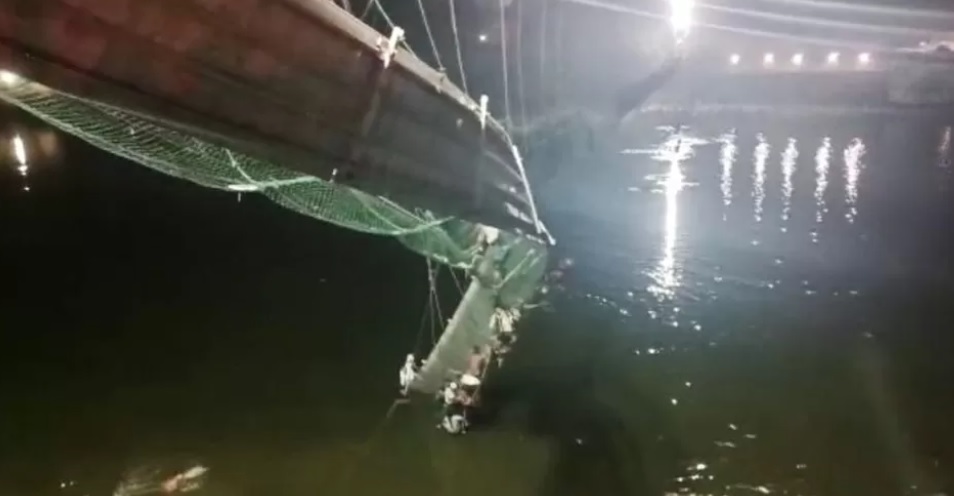 At least 60 people have died after a pedestrian bridge collapsed in India’s western state of Gujarat.

Reports say as many as 400 people were on the structure at the time. Authorities said rescue efforts were continuing through the night.

The incident comes just days after the bridge was reopened following repairs.

The 230-metre-long (754 feet) colonial-era crossing was built during British rule of India in the 19th Century.

Videos show scenes of chaos as onlookers on the river banks attempt to rescue those trapped in the water as darkness fell.

Another video shows people climbing up netted wire remains of the bridge to escape the water.

The suspension bridge, locally known as a Julto Pool, is a popular tourist attraction in the area.

Emergency responders from neighbouring districts were sent to the scene to help with rescue efforts.

Indian Prime Minister Narendra Modi, who is in his home state of Gujarat on a three-day visit, said he was “deeply saddened by the tragedy”.

Mr Modi has announced compensation for the injured, as well as the next of kin of those who have died. (Courtesy BBC)

colombogazette.com - At least 60 killed after suspension bridge in Gujarat collapsed

British record signing Enzo Fernandez made his Chelsea debut but could not help his new side claim only their second win of 2023 as they were held by Fulham at Stamford Bridge. Argentina midfielder Fernandez completed a £107m move to the Blues from Benfica three days ago and Graham Potter opted to hand him an […]

Top US diplomat says China balloon over US is ‘unacceptable’
Friday, February 3, 2023 - colombogazette.com

Secretary of State Antony Blinken has said China’s decision to fly an apparent spy balloon over the US is “unacceptable and irresponsible”. The top American diplomat has abruptly cancelled a trip to Beijing, which would have been the first high level US-China meeting there in years. China earlier expressed regret, saying it was a weather […]

The 75th Independence Day ceremony kicked off after President Ranil Wickremesinghe arrived at Galle Face Green a short while ago.