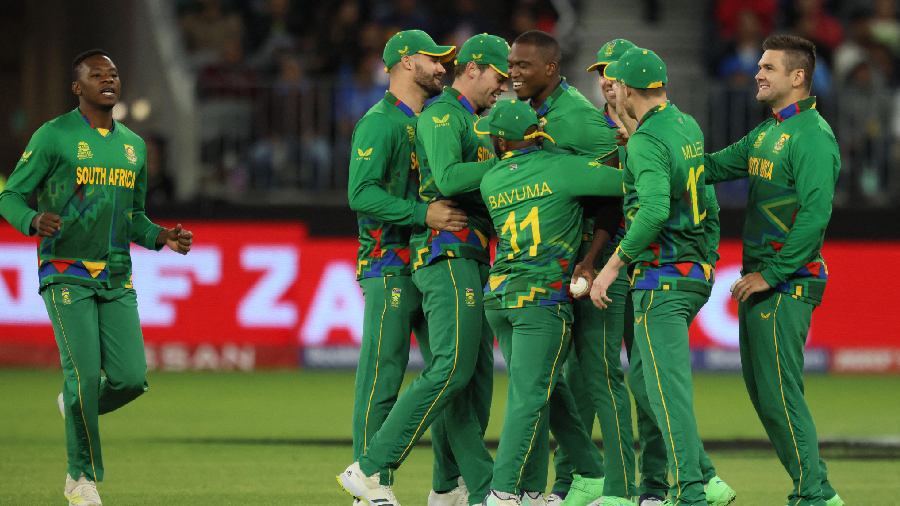 South Africa moved to the top of Group 2 with a nervy five-wicket victory over India in the Men’s T20 World Cup.

Lungi Ngidi took 4-29 as part of a fine Proteas bowling display to restrict India to 133-9, despite Suryakumar Yadav’s punchy 68 from 40 balls.

South Africa slipped to 24-3 in reply but David Miller’s 59 from 46 balls saw them home with two balls to spare.

Victory in Perth moves the Proteas ahead of India, who suffer their first defeat of the tournament.

Miller and Aiden Markram put on 76 for the fourth wicket to tip the match back in South Africa’s favour after their poor start with the bat.

Markram hit 52 from 41 balls to sustain the South African innings in the middle overs, though he was dropped on 35 by Virat Kohli and survived Rohit Sharma missing a clear run out chance from five yards seven balls later.

Markram eventually fell in the 16th over but Miller kept his composure to see South Africa over the line in a thrilling finish.

Earlier, Bangladesh had briefly moved into the top two with a dramatic victory over Zimbabwe, who are also still able to qualify.

In Sunday’s second game, Netherlands were eliminated following defeat by Pakistan, whose chances of progressing are now very slim. They need to beat both Bangladesh and South Africa and hope several other results go their way.

This was a statement victory by South Africa against an India side ranked number one in T20s.

After rain ruined their opening match against Zimbabwe, the Proteas have now secured back-to-back victories to announce themselves as genuine contenders for the title.

Their fearsome seam attack exploited a fast and bouncy pitch in Perth to blast through the India top order, with a disciplined performance in the middle overs and some excellent fielding ultimately setting the platform for victory.

After winning the toss and choosing to bat, India limped to 33-2 after the powerplay, with openers Rohit and KL Rahul falling to Ngidi in the space of four balls.

Kohli became Ngidi’s third victim as he was dismissed for the first time this tournament for 12, before Deepak Hooda edged the fiery Anrich Nortje through to wicketkeeper Quinton de Kock for a duck.

When Kagiso Rabada took a superb diving catch at deep fine leg to remove Hardik Pandya for two off the bowling of Ngidi, India were reeling on 49-5.

After a tight opening spell, left-armer Wayne Parnell returned to remove Dinesh Karthik, Ravichandran Ashwin and Suryakumar to finish with figures of 3-15.

“This is one of my biggest dreams to do something like this at a World Cup and help my country win a game,” said player of the match Ngidi.

“I’m definitely going to cherish this one.”

Suryakumar smashed six fours and four sixes to launch a gutsy counter-attack but kept running out of partners, with Rohit the next-highest scorer with 15.

“Our bowling was pretty scary,” Miller told BBC Test Match Special. “We’ve got a great attack and I was at deep square and sweeper so got the side view, which was pretty awesome to watch.

“To put in a performance like that was really important.”

India matched South Africa’s intensity with the ball to drag themselves back into the game.

Arshdeep Singh found some wild swing to remove De Kock and Rilee Rossouw, who had hit centuries in his previous two T20 matches but made a duck here, in the second over of the reply.

Temba Bavuma’s poor form with the bat continued when his attempted a ramp shot off Mohammed Shami edged through to wicketkeeper Karthik for 10.

Markram and Miller favoured patient accumulation over power hitting as South Africa trundled to 40-3 at the halfway stage, but the match turned on two key moments as they looked to accelerate.

First, Kohli spilled a routine chance at mid-wicket, before Rohit missed the stumps with an underarm throw with Markram well short of his ground.

Markram, who hit six fours and one six, eventually holed out to Suryakumar off Hardik, but the runs he added after his reprieves proved decisive, with Miller then having the platform to kick on and win the game.

“We were just not good enough,” said India skipper Rohit. “We’ve played in such conditions before so the cold is not an excuse.

“The last two games we were pretty good on the field and we want to continue to be consistent in that department but unfortunately, we didn’t hold our chances and missed a few run outs, myself included.” (BBC)