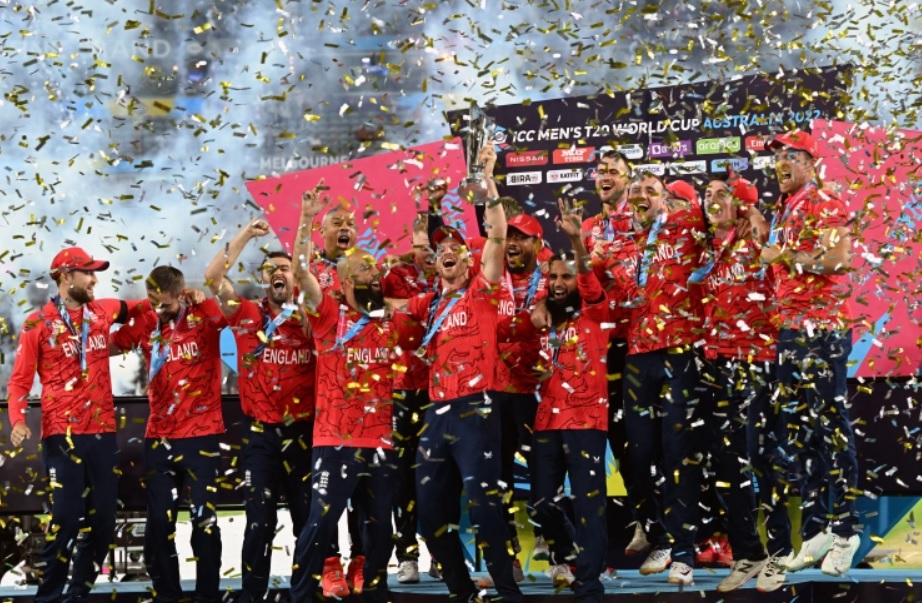 Chasing 138 in front of a raucous Pakistan-supporting crowd, they fell to 45-3 and 84-4 amid electric fast bowling.

But, under intense pressure at the iconic Melbourne Cricket Ground, Ben Stokes wrote himself further into the folklore of English cricket by finishing on 52 not out.

He was there at the end, as he was in the 2019 50-over World Cup final, as this current white-ball side provided another of English cricket’s greatest wins.

As the equation tightened, Stokes capitalised on a cruel injury to Pakistan left-armer Shaheen Afridi and took England to victory with six balls to spare.

The win, thanks in large part to a superb bowling performance from Sam Curran and Adil Rashid, means England become the first team to hold the men’s 20 and 50-over world titles.

It is also their second T20 world title following victory in the West Indies in 2010.

As Stokes pulled away after hitting the winning runs, he roared – his celebration reminiscent of his other iconic knock in the 2019 Ashes Test at Headingley.

He was soon mobbed by his team-mates before they ran to celebrate in front of the few England fans among this massive crowd of 80,462.

The pitch was tricky but England had looked strong favourites after their bowling performance restricted Pakistan to 137-8.

England, though, know finals are never easy. Their experience at Lord’s in 2019 showed that.

Pakistan have the best pace attack in the world and the crowd erupted as early wickets fell in the chase.

This is also a weekend in which England’s Red Roses lost a rugby union World Cup final and the men’s rugby league side were beaten in a World Cup semi-final.

But Stokes stayed calm throughout, even as the equation tightened to a situation where 41 runs were needed from 30 balls, to steer his side home with his first T20 international fifty.

His innings also banished memories of the 2016 T20 World Cup final, when he was crushed by Carlos Brathwaite’s four consecutive sixes in the final over as West Indies took the title.

After a shock defeat by Ireland and a washout against Australia in the group stage, England needed to win all their remaining games to lift the trophy, just as they did in the 2019 50-over World Cup.

Pakistan – and the crowd – sensed their moment when, with 54 needed from 45, Harry Brook sliced leg-spinner Shadab Khan straight to long-off.

But in taking the catch Shaheen, who had bowled Alex Hales in England’s first over, injured himself – a moment that proved crucial.

He returned to the field to bowl the 16th but after one delivery he limped off the field.

That left part-time spinner Iftikhar Ahmed to finish the over and Stokes took his chance, smacking a four through extra cover and a six over long-off to bring the game under England’s control.

Moeen Ali followed by hitting seamer Mohammad Wasim for three fours in the next over and the result was all but secure, even though Moeen was bowled in the 19th over.

He and Naseem Shah, who somehow went wicketless in four sensational overs, did all they could to secure what would have been Pakistan’s second T20 title.

England were similarly impressive with the ball, albeit after a nervy start from Stokes, who began the match with a no-ball and then a wide.

Pakistan’s fearsome opening pair of captain Babar Azam and Mohammad Rizwan were surprisingly cagey early on and Rizwan was bowled in the fifth over by Curran for 15.

Leg-spinner Rashid then had the dangerous Muhammad Haris caught at long-on with his first ball and in his third over delivered a crucial blow.

Babar had steadily reached 32 but Rashid foxed him with a googly and took a fine low return catch. Rashid followed that with five dots to Iftikhar to complete a remarkable wicket-maiden in the heat of a World Cup final.

From there, Pakistan did not recover. They lost seven wickets for 53 runs in the last nine overs.

Curran was deservedly named player of the tournament for a series of stunning performances and once again his mix of slower yorkers and bouncers proved almost impossible to hit – he conceded just 12 runs off his four overs.

Shan Masood was Pakistan’s highest scorer with 38 from 32. He chipped Curran to deep square leg in the 17th over, which allowed Chris Jordan to help close out the innings.

Jordan, who retained his place after Mark Wood failed to recover from injury, added the wickets of Shadab Khan and Mohammad Nawaz as only 18 runs came from the last four overs. (Courtesy BBC)