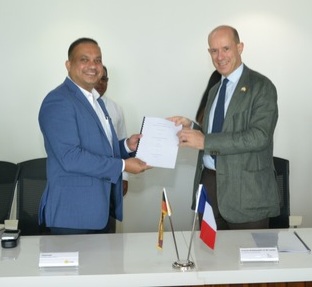 France says it continues to support Sri Lanka’s ambitious path towards 70% renewable energy by 2030 despite the ongoing economic crisis.

The agreement was signed by AFD Country Director Mr. Reda Souirgi, Chairman of the Ceylon Electricity Board Nalinda Illangakoon and, EDF Center for Transportation Systems Engineering representatives in the presence of H.E. Mr. JeanFrançois Pactet, Ambassador of France to Sri Lanka.

This cooperation aims at enhancing CEB capacities in integrating renewable energy from the optimization of the procurement for transmission lines projects to the modelling capacities of energy generation and transmission.

Jean-François Pactet, Ambassador of France to Sri Lanka said: “This program is the fruit of a long-lasting knowledge exchange and an example of the synergies that close cooperation between Sri Lanka and France can bring towards achieving our shared objectives to combat climate change.”

Following the signature, Jean-François Pactet Ambassador of France, and EDF representatives visited the Kalutara substation, a sample of the achievements done by CEB under the Green Power Development and Energy Efficiency Improvement Investment Program and financed by AFD.