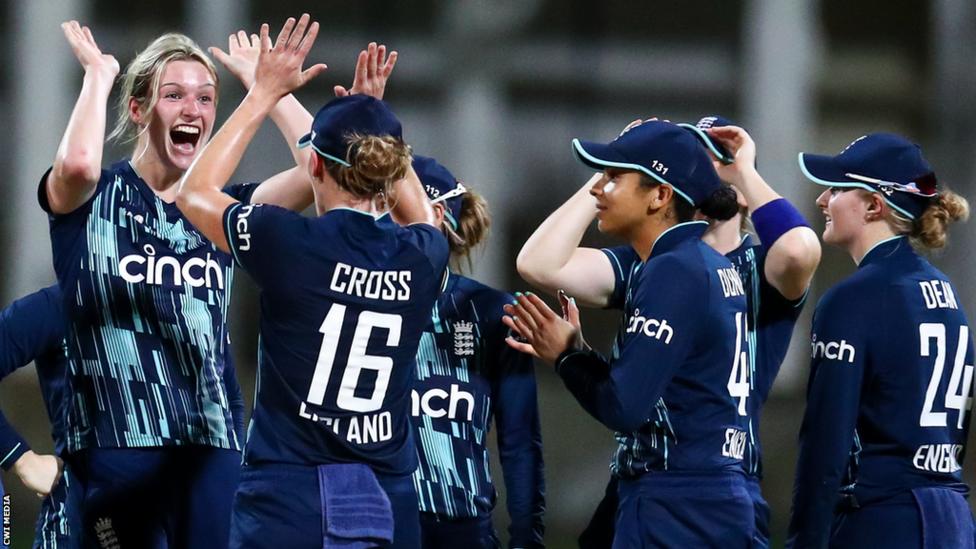 Chasing 261, the hosts were bowled out for 118 with Lauren Bell taking her best international figures of 4-33.

Bell and Kate Cross, who took 2-35, tore through a fragile West Indies batting line-up as the hosts slipped to 49-5 inside the first 10 overs of their chase.

It was another extremely one-sided encounter, with England taking an unassailable 2-0 lead in the three-match series.

England’s 260 all out looked below par at the halfway stage, after they chose to bat first on a flat pitch on which they scored 307 two days ago.

Sophia Dunkley made 55 and Amy Jones was left stranded on 70 not out as West Indies put in a much-improved display with the ball and in the field – captain Hayley Matthews leading the way with 3-50.

Opener Emma Lamb was run out for 25 on her return to the side as she replaced Alice Capsey, who has returned to the UK after breaking her collarbone in the first ODI.

But the hosts’ batting crumbled once again, with Rashada Williams’ unbeaten half-century the only contribution of more than 20.

Bell took two wickets in the first over, including the prized wicket of Matthews, to spark a dramatic West Indies collapse, and spinners Sophie Ecclestone and Charlie Dean took two wickets apiece to complete the win.

The third and final ODI takes place at the same venue on Friday at 18:00 GMT.

The sight of an England opening bowler causing havoc with extravagant inswing is not an unfamiliar one in recent years.

Anya Shrubsole retired in April after more than a decade of international cricket, and when a player of such calibre steps aside, there is always a lingering question of who can replace them.

The tall 21-year-old made her international debuts in all three formats in the summer, and was impressive without really taking centre stage.

But defending what initially looked like a below-par total in Antigua, Bell ripped through the West Indies’ top order with a brutal spell of bowling; bamboozling the batters with a lethal combination of pace, bounce and swing.

Matthews was caught at slip, before senior batter Kycia Knight was caught behind two balls later. Shemaine Campbell was pinned lbw shortly after, and Chedean Nation edged a short ball behind in a chaotic, breathless start to the chase.

The ever-consistent Cross may feel hard done by after bowling a brilliant spell from the other end, combining with Bell to effectively end the game inside the first powerplay.

Williams, 25, was the only bright spark in a bleak West Indies performance, taking the attack to England as she remained not out on 54, but the gulf between the two sides was once again harshly exposed as the remainder of the innings felt like no more than a formality.

At the halfway stage of the game, it felt like a huge missed opportunity for the West Indies to fight their way back into the series.

They had England teetering at 133-4, with both Knight and Sciver dismissed, as England’s top order made promising starts but could not accelerate.

But the opportunity went begging as they failed to capitalise on such a promising position.

Dunkley kept her cool, playing with attacking intent despite the regular wickets, sweeping the spinners and punishing the short balls that the seamers offered.

But the game was there for the taking for the hosts when Dunkley was bowled after attempting a sweep from outside off stump, and Danni Wyatt fell soon after for 13 as England were 175-6 with 17 overs still to bat.

They succeeded in slowing the pace, as England struggled to score fluently against the spin of Matthews and Afy Fletcher, and they gradually chipped away at the lower order.

But just as Dunkley had done, Jones stood in their way and after a tough year with the bat so far, looked close to her destructive best with an array of reverse sweeps combined with power down the ground.

In the end, 260 was more than enough for England – but after two extremely one-sided games to start the series, it is difficult to see West Indies having many better opportunities than this to get back in it. (BBC)