Criminal probe on Nanuoya accident which killed 7 including children 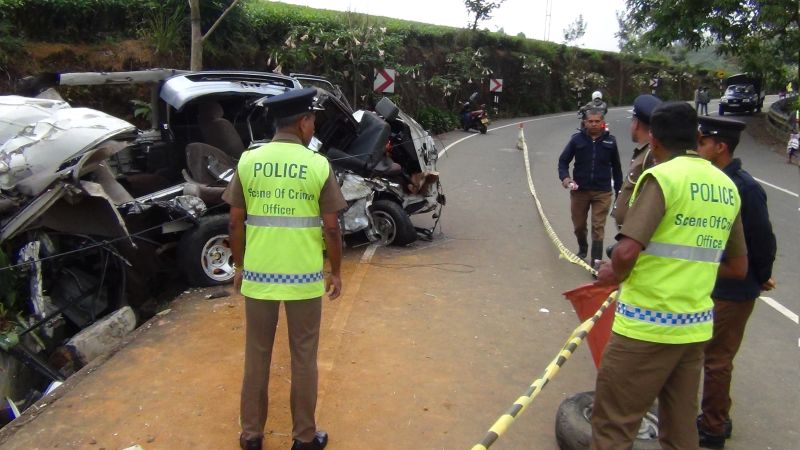 A criminal investigation is underway into the accident in Nanuoya which killed 7 people including a father, mother and their 2 children.

The Police crime scene investigators visited the location today to investigate the accident.

Seven people were killed and at least 50 others, including a number of students from Thurstan College in Colombo sustained injuries following the accident in Nanuoya, Nuwara Eliya last evening.

The accident involved a bus transporting the students from Thurstan College in Colombo who were on a trip and a van and a three-wheeler.

The bus had crashed into the other 2 vehicles and went down a precipice.

Among those killed in the accident last night (Friday) are Abdul Raheem (55) and Aysha Fathima (45) and their 2 children as well as a relative aged 13, 8 and 14. All five were travelling in the van.

The students from Thurstan College in Colombo who were in the bus sustained minor injuries.

Eyewitnesses blamed the bus driver for the accident saying he had disregarded the street signs in the area. (Colombo Gazette)

1 of 7
colombogazette.com - Criminal probe on Nanuoya accident which killed 7 including children

The Paris Club of creditor nations have provided the required financing assurances to support the International Monetary Fund s (IMF) approval for the Extended Fund Facility (EFF) for Sri Lanka.

The European Union (EU) has allocated 4 million Euro (approximately 1,5 billion rupees) in grants for fertilizers, seeds, and training to the most vulnerable farmers, as a response to the agriculture and food security crisis in Sri Lanka. These funds will be implemented by the Food and Agriculture Organization (FAO) in Sri Lanka. The action […]