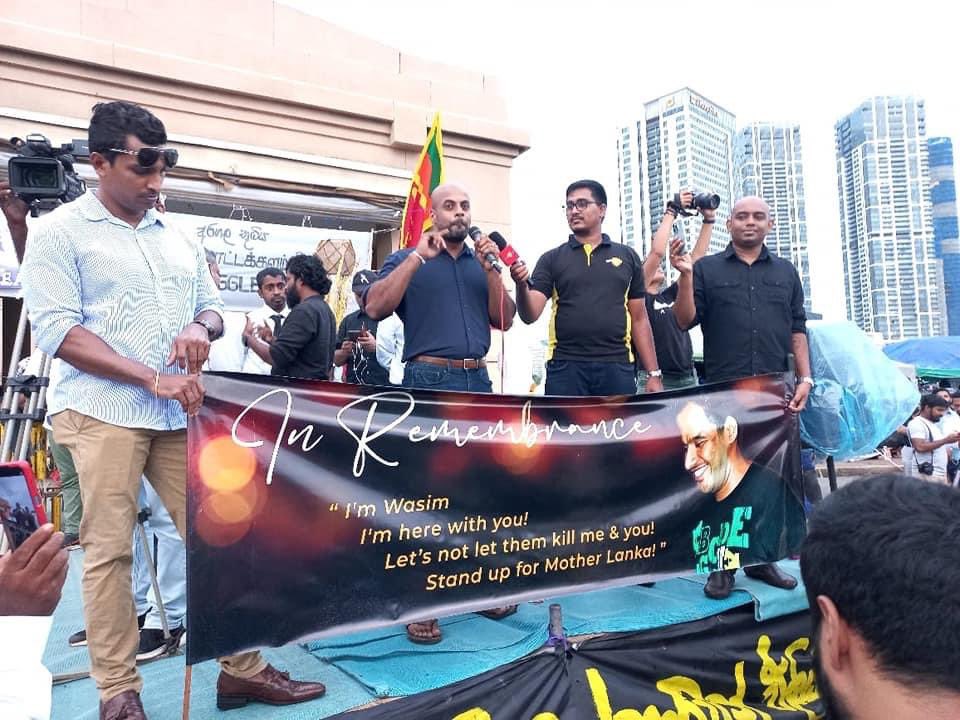 Rugger player Wasim Thajudeen was remembered by his his family and friends at GotaGoGama today, 10 years after his murder.

A walk was staged from S. Thomas’ Preparatory School, Colpetty to GotaGoGama in memory of Wasim Thajudeen.

The participants of the walk later gathered near the Presidential Secretariat and spoke to those gathered at Galle Face.

Meals were also distributed to the public in memory of Wasim Thajudeen.

Thajudeen was killed in a car crash on 17 May 2012, which was initially pronounced to be an accident but was later investigated as a murder.

According to the police Thajudeen had been driving to the airport when, around 1.00am, he lost control of his car and crashed into the wall of the Shalika grounds on Park Road, Narahenpita, resulting in the car exploding.

However, the death was surrounded in mystery with allegations later surfacing that Thajudeen was tortured and murdered.

In February 2015, following a change in government, the police announced that Thajudeen’s death was not accidental and that the investigation had been handed over to the Criminal Investigation Department (CID). (Colombo Gazette)

Members have been appointed for the two sub-committees that were decided to be appointed in the inaugural meeting of the National Council, at its second meeting which was held yesterday (Oct 06) at the Parliament Complex.

Sapugaskanda closed due to shortage in Forex
Friday, October 7, 2022 - colombogazette.com

The Sapugaskanda refinery has been closed due to a shortage in Forex for Crude Oil cargos. However there will be no shortage in refined products as CPC has adequate stocks of all products & CBSL has made available the weekly Forex requirements for refined products, Power and Energy Minister Kanchana Wijesekera said today.

The Madras High Court denied default bail to a few Sri Lankans who were part of an LTTE operation to steal Rs 40 crore from the bank account of a dead woman in Mumbai by fabricating documents. A division bench of justices PN Prakash and RMT Teekaa Raman recently dismissed the appeals filed by two […]