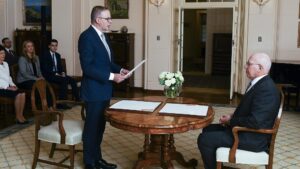 Anthony Albanese has been sworn in as Australia’s new leader and will fly immediately to an international summit.

It remains unclear whether he will form a majority or govern with the support of crossbenchers.

Mr Albanese will fly to Tokyo on Monday to meet the leaders of the so-called Quad nations – the US, India and Japan.

He was sworn in with four key cabinet members, including new Foreign Minister Penny Wong, who will travel with him to Japan.

It is Australia’s first Labor government in almost a decade. The party has won 72 lower house seats but counting continues to determine whether they can get the 76 needed to form a majority.

Both major parties suffered a hit to their primary vote, with almost a third of people putting minor players – including the Greens and independents – as their first preference.

The Quad group is seen as largely aiming to counter growing Chinese influence in the Indo-Pacific region.

It will meet on Tuesday following recent diplomatic tensions in the Pacific, after the Solomon Islands last month signed a security pact with China.

The US and Australia hold fears the deal could allow China to build a naval base in the region.

In a statement ahead of the meeting, Mr Albanese praised his counterparts’ commitments to region.

“The Quad Leaders’ Summit brings together four leaders of great liberal democracies – Australia, Japan, India, and the United States of America – in support of a free, open and resilient Indo-Pacific,” he said.

Australia would take “new energy and much more to the table – including our commitment to act on climate change after a lost decade”, she said. (BBC)

Decision based on GoSL assurance given in Geneva last June By Shamindra Ferdinando Dr. Gunadasa Amarasekera yesterday (14) said President Ranil Wickremesinghe’s government should explain the rationale behind delisting several Tamil Diaspora groups and individuals. “The timing of the government announcement really worries us,” Dr. Amarasekera said on behalf of the Federation of National...

KOCHI: In a major revelation in a case pertaining to the seizure of a huge quantity of narcotic drugs along with five AK-47 rifles and 9mm ammunition numbering 1,000 from Sri Lankan fishing boats, the NIA has stated that an accused had been involved in activities of proscribed terrorist organisation LTTE within India and abroad. […]

Funds are to help 204 million people and communities as armed conflict and climate change threaten their livelihoods (Al Jazeera) The United Nations’ humanitarian projects face a record funding gap this year, with only a third of the required $48.7bn secured so far as global needs outpace pledges, according to the world body’s Office for […]

Under 17 Division I Cricket   by Reemus Fernando    Spinner Pubudu Mihiranga produced a five wicket haul to lead Richmond to 60 runs victory over Sri Devananda in the Under 17 Division I cricket pre-quarter-final played at Ambalangaoda on Sunday. Richmond were in danger of missing the quarter-final berth after Ravindu de Silva triggered a middle order […]