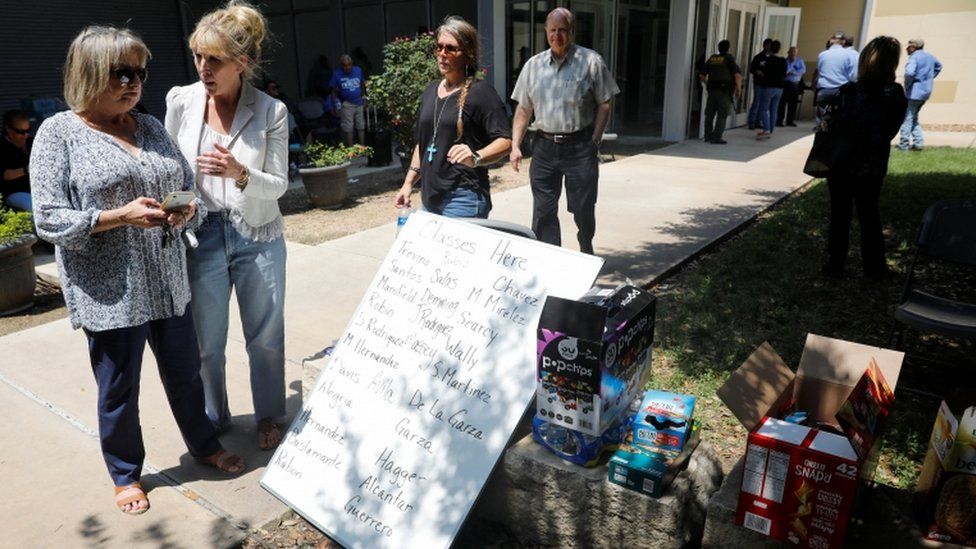 At least 18 young children and a teacher have died in a shooting at a primary school in south Texas.

The 18-year-old gunman opened fire at Robb Elementary School in the city of Uvalde before he was killed by law enforcement, officials said.

Investigators say the suspect may have been carrying a semi-automatic rifle and handgun.

Shootings at primary schools, where pupils range in age from five to 11, are still relatively rare.

The attack on Tuesday comes amid a national rise in gun violence.

The Associated Press news agency reports that a US Border Patrol official who was nearby when the shooting began on Tuesday morning rushed into the school and shot and killed the gunman, who was behind a barricade.

The teen shooter is also suspected of killing his grandmother at the start of the rampage, law enforcement officials told CBS News, the BBC’s partner in the US. Local media report he may have been a high school student in the area.

The suspect was armed with a handgun, an AR-15 semi-automatic rifle and high-capacity magazines, CBS reports.

Uvalde Consolidated Independent School District Chief of Police Pete Arredondo said the shooting began at 11:32 local time, and that investigators believe the attacker “did act alone during this heinous crime”.

The Uvalde Consolidated Independent School District – around 85 miles (135km) west of the city of San Antonio – told the BBC that students had been evacuated from the school. Just under 500 pupils are enrolled in the school.

Local hospitals said students from the school were being treated by emergency services.

A 66-year-old woman and a 10-year-old girl were in critical condition, but being treated at a hospital in San Antonio, University Health hospital officials say.

The Uvalde Memorial Hospital posted on Facebook that 13 children had been taken to hospital “via ambulances or buses”.

The FBI is aiding the investigation, according to CBS.

In a speech from the White House, US President Joe Biden said he was “sick and tired” of responding to mass shootings as he called for gun control.

He ordered that flags on the White House and other US federal buildings be flown at half-mast in honour of the victims in Uvalde.

The last day of classes for students in the school district was scheduled for Thursday. Seniors at the local high school in Uvalde, a community of about 16,000 residents, were due to graduate on Friday.

But all classes and activities have now been cancelled for the remainder of the year.

School shootings have become recurring emergencies in the US, with 26 recorded last year, according to EdWeek, an education trade publication.

Active shooter lockdown drills are a common part of the school curriculum, from primary to high school.

The 2012 shooting at Sandy Hook Elementary School in Connecticut shocked Americans. Twenty of the 26 victims in that attack, which was carried out by a 20-year-old, were between the ages of five and six.

Speaking on the floor of the US Senate in Washington DC on Tuesday, Connecticut Democratic Senator Chris Murphy accused his colleagues of complacency and begged them to pass gun control legislation.

“What are we doing? Why are you here? If not to solve a problem as existential as this? This isn’t inevitable,” he said.

“These kids weren’t unlucky. This only happens in this country. Nowhere else, nowhere else do little kids go to school thinking that they might be shot that day.”

The National Rifle Association, the powerful lobby group that opposes gun control regulations, will hold its annual conference in the Texan city of Houston on Friday.

A 2020 report from the US Government Accountability Office found that about two-thirds of all school shootings happen at the high school level, and that shootings in elementary schools are usually accidental.

Guns overtook car crashes to become the leading cause of death for US children and teenagers in 2020, according to data released by the Centers for Disease Control and Prevention (CDC) last month.

On Monday, an FBI report found that “active shooter” rampage attacks have doubled since the coronavirus began in 2020. (Courtesy BBC)

BASL writes to IGP over arrests by police without following due process
Wednesday, August 10, 2022 - adaderana.lk

The Bar Association of Sri Lanka (BASL) has written to IGP C. D. Wickremeratne drawing his attention to complaints received by BASL from its members relating to arrests and detentions being carried out without adherence to due process Âin a manner akin to abductions.Â