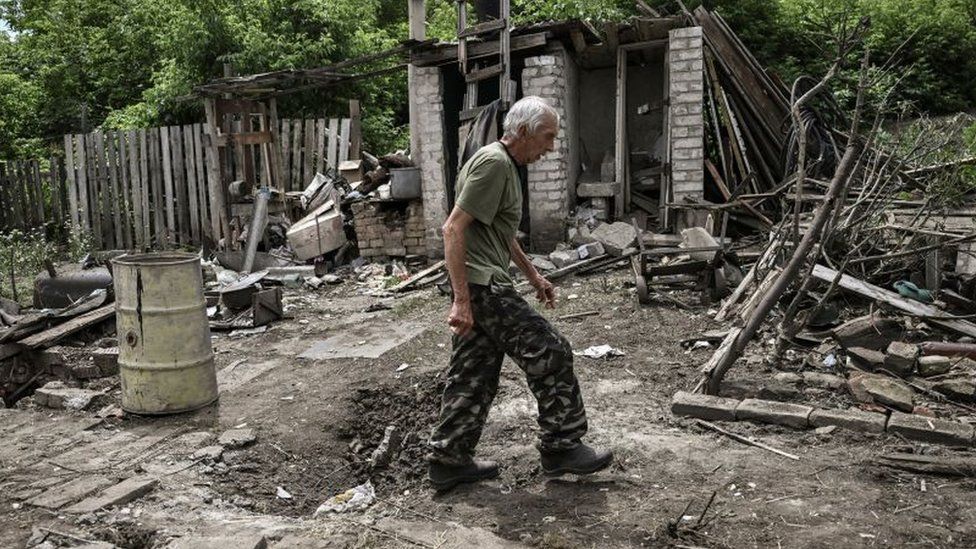 All bridges to the embattled Ukrainian city of Severodonetsk have now been destroyed, the local governor says.

Fierce fighting is taking place in the eastern city where Ukrainian officials said Russian artillery had driven its forces out of the centre.

For weeks capturing Severodonetsk has been a top military goal for Russia.

Taking Severodonetsk and the nearby city of Lysychansk would give Moscow control of the entire Luhansk region, much of which is already controlled by Russian-backed separatists.

All three bridges into Severodonetsk were destroyed, Mr Haidai posted on Telegram. Those residents remaining in the city were being forced to survive in “extremely difficult conditions”, he added.

Former British soldier Jordan Gatley is among those to have been killed while fighting to defend the city, his family confirmed on Sunday.

Ukraine’s President Volodomyr Zelensky described the human cost of the battle for the city as “terrifying”. Ukrainian troops, he said, had been fighting Russian forces for “literally every metre”.

Reports suggest that about 70% of the city is now under Russian control.

Ukrainian troops remaining in the city must “surrender or die”, a military representative of the pro-Russian self-proclaimed Donetsk People’s Republic said.

Speaking to media in Donetsk, Eduard Basurin said, “Ukrainian divisions that are there [in Severodonetsk] are there forever.”

A top Russian official said Moscow’s objective was to protect the self-declared people’s republics of Donetsk and Luhansk.

“In general, the protection of the republics is the main goal of the special military operation,” Kremlin spokesperson Dmitry Peskov was quoted as saying by RIA Novosti news agency.

When President Vladimir Putin launched the invasion on 24 February he said Russia’s goal was to “demilitarise and de-Nazify Ukraine”. Later another objective was added: ensuring Ukraine’s neutral status.

Also on Monday, Ukrainian officials said weapons being supplied by the West were not arriving as quickly as they should.

Speaking to the BBC World Service’s Newshour, an adviser to the Ukrainian defence minister said troops defending Severodonetsk would have been more effective if heavy weapons had been supplied earlier.

Troops are defending the city “with what we can” but would be “much more efficient at repelling the enemy and liberating Ukrainian land had we received more heavy weaponry by now”, Yury Sak said.

He added that Russia’s advantage was overwhelming – firing an average of 50,000 rounds a day and creating a “barrage of mortar shells, air bombardment, missile strikes” over Ukraine.

In recent weeks Western countries have committed to sending longer-range weapons to Kyiv, including the UK which for the first time said it would be sending multiple-launch rocket systems to help Ukraine defend itself. (Courtesy BBC)

President Ranil Wickremesinghe has proposed the establishment of an International University on Climate Change in Sri Lanka.

Woman found to be in possession of Ice arrested
Friday, September 30, 2022 - adaderana.lk

Police Special Task Force (STF) has arrested an elderly woman with crystal methamphetamine, (commonly known as Ice ) in her possession.

Two unidentified bodies have been recovered from Kurundu Oya in the area of Walapane, the police say.

Due to current economic conditions social problems were worsening,

The Members of the European Parliament’s Subcommittee on Human Rights (DROI) recently urged Pakistan to undertake timely reforms and legislative changes on human rights issues including the “misuse of blasphemy laws”. A press release issued by the EU mission in Islamabad stated, “They called for determined and structured action, including the swift adoption of laws […]