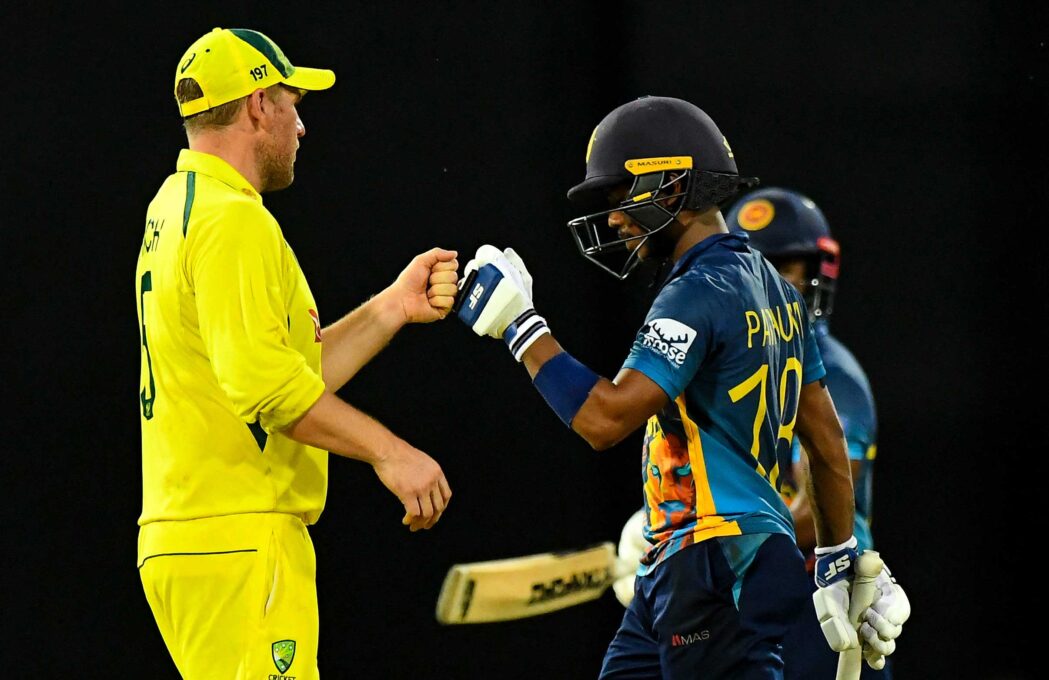 Pathum Nissanka pushed through pain and the baking Colombo heat to post a maiden ODI century that sunk Australia in the third one-day international and gave Sri Lanka a 2-1 lead in the series.

Captain Aaron Finch, who won the toss and batted first, anticipated the R.Premadasa Stadium surface would offer increasing amounts of turn as the evening wore on yet Nissanka (137 from 147 balls) and Kusal Mendis (87 off 85) tamed a depleted Australian attack with comfort and flair under lights.

The pair put on 170 for the second wicket before Mendis was forced to retire hurt with what appeared to be bad cramps, as Nissanka played his finest hand in coloured clothing for Sri Lanka and eclipsed his previous ODI best of 75.

It marked the first time Sri Lanka have chased down more than 290 after being inserted in by a top-tier ODI team at their nation’s premier cricket stadium.

Finch (62 off 85) earlier posted his second half-century of the tour but it was Travis Head’s late-surging 70 from 65 that underpinned the Steve Smith-less side’s fightback following a stumbling start to them reach to reach 6-291.

Head, who slammed three sixes from the penultimate over bowled by teenage spinner Dunith Wellalage, and fellow South Australian Alex Carey (49 off 52) had ensured the Aussies scored at nearly seven-an-over for the second half of their innings.

Glenn Maxwell (33 off 18) helped put the icing on the cake as Sri Lanka rued four dropped catches and an lbw appeal against Head (on 4) off Maheesh Theekshanna that would have been out had they reviewed.

The hosts bowled 36 overs of spin with leg-spinner Jeffrey Vandersay (who took 3-49 filling in for the injured Wanindu Hasaranga) taking the key scalps of Finch (to a first-slip screamer from Dhananjaya de Silva), Marnus Labuschagne and Maxwell.

Australia on the other hand dropped leggie Mitchell Swepson to bolster their batting order, relying on the spin of Maxwell, Labuschagne and even Head to complement second-gamer Matthew Kuhnemann.

Those spinners finished with 1-163 from 25 overs between them.

With his side facing a challenging pursuit, recalled keeper-bat Niroshan Dickwella failed to make the most of Mitch Marsh dropping a straightforward skied chance as he was bowled by Maxwell four balls later.

But from 1-42, the only obstacle to Nissanka and Mendis’ run-scoring was themselves as the duo required increasingly frequent mid-pitch visits from Sri Lankan medical staff through a steamy evening during where the humidity hovered around 85 per cent.

Nissanka’s right leg appeared to be giving him trouble but it was Mendis who succumbed as he limped off on the ground to a standing ovation with 80 still required off 72 balls.

It took a sharp one-handed grab from David Warner to finally end Nissanka’s stay but, despite Jhye Richardson (2-39) snaring two wickets in four balls late in the chase, the home side clinched victory with nine balls to spare.

Australia batted in the daytime for the first time in the series as Finch continued the strong, though not yet dominant, form he’s shown all tour with an innings highlighted by a crisp straight drive that clipped the non-striker’s end bail on the way to the boundary.

Yet Finch joined the other three members of Australia’s top four (including the fit-again Marsh who batted in Smith’s No.3 spot but managed only 10) back in the dugout shortly after the innings’ midway point.

It was precisely the scenario the tourists had been determined to avoid, given match-defining scores from their top-order had not been forthcoming in the first two ODIs either.

But after Head and Carey laid the platform, the packed-out crowd were treated to the full Maxwell experience in the space of 18 balls.

The right-hander survived being dropped second ball and a wild top-edged switch hit the following delivery before a series of typically entertaining boundaries fuelled the late onslaught that brought 98 runs off the final 10 overs.

The right-hander survived being dropped second ball and a wild top-edged switch hit the following delivery before a series of typically entertaining boundaries fuelled the late onslaught that brought 98 runs off the final 10 overs.  (Courtesy cricket.com.au)