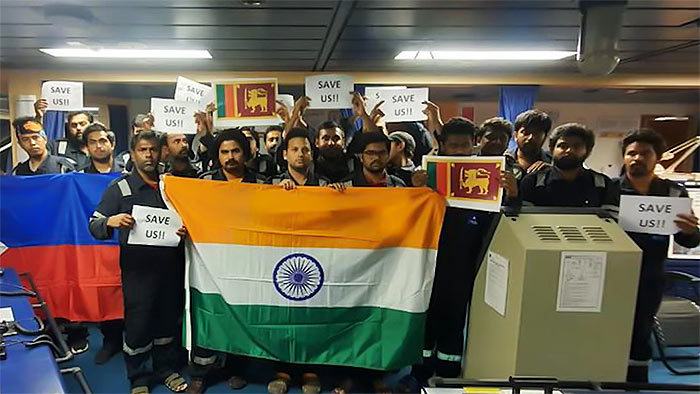 The Ministry of Foreign Affairs says it is working closely with the relevant parties for the early release of 08 Sri Lankan nationals who are parts of the 26-member crew of the oil tanker MT Heroic Idun, which was detained by Equatorial Guinea in early August.

The vessel’s crew also included 16 sailors from India, one from Poland and another from the Philippines.

The sailors were taken into custody in international waters on August 12 allegedly for not displaying the flag of Equatorial Guinea and have been in detention for more than 80 days ever since. They are fearing arrest by the Nigerian Navy.

In a statement, the vessel’s managers OSM Maritime said the MT Heroic Idun was supposed to load an oil consignment from Akpo terminal in Nigeria in early August.

“Whilst waiting for the necessary clearance papers after having tendered notice of readiness in line with voyage orders received from charterers, the Nigerian navy approached the vessel under cover of darkness in a way that caused serious concerns and it was believed to be an attempted piracy attack. The vessel following Best Management Practice escaped from the area and out into international waters.”

A few days later, at the request of the Nigerian navy, the vessel was intercepted in international waters by a naval vessel from Equatorial Guinea.

As per documents filed in the International Tribunal for the Law of the Sea, the Equatorial Guinea navy has followed a maritime code of conduct and detained the vessel on an alert sent by the Nigerian naval vessel.

Meanwhile, the Nigerian Navy says it is conducting investigations into the alleged activities of the oil tanker MT Heroic Idun including oil theft.

OSM Maritime alleged that the sailors were escorted to Malabo – the capital of Equatorial Guinea – at gunpoint.

The vessel’s manager stated that a fine was paid at the end of September against a promise of release of the vessel and its crew. “However, both the ship and crew remain in captivity.”

The company said it has now been informed that a decision has been made by the authorities of Equatorial Guinea and Nigeria to move the vessel back to Nigeria for further investigations.

Meanwhile, Capt Rajesh Trehan, a retired mariner and father-in-law of the ship’s master Capt Tanuj Mehta, told the BBC that everyone was under the impression that the crew and the ship would be released once the fine was paid to Equatorial Guinea on 28 September. “But suddenly Equatorial Guinea decided to accept Nigeria’s request.”

OSM Group CEO, Finn Amund Norbye alleged that the seafarers have been treated as criminals, without any formal charges or legal process for close to 03 months. It is nothing short of a shocking maritime injustice, he added.

Norbye also said: “OSM together with the Ship Owner, Insurers, Legal advisors, Flag State, Embassies, ITF, and other industry players has worked continuously to bring this to a conclusion. We believe that with this development to move the vessel under neighboring state jurisdiction, the chance of any swift resolution is further diminished.

“We must now see urgent action to resolve this situation! For the sake of our 26 seafarers, OSM and its stakeholders will continue to work tirelessly with all parties able to assist us with this concerning situation.”

The vessel’s crew members have recorded videos and made phone calls to their families and the authorities of their respective countries, seeking help to ensure their release.

The Public Utilities Commission of Sri Lanka (PUCSL) says it will not to approve any scheduled power cuts until 17 February in order to protect the rights of over 331,000 students sitting for the 2022 G.C.E. Advanced Level examination.