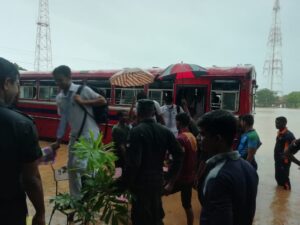 The Army was deployed to assist over 150 GCE O/L candidates who were affected by the floods in Puttalam today.

Army troops removed all the desks and chairs from the ground floor of the three-storied building and helped move the candidates to the upper floor using three Army buses as the flood water levels had risen to about two feet in the inundated school compound.

Meanwhile, troops of the 16 Sri Lanka National Guards (SLNG) under the command of the 241 Brigade of the 24 Division of the Security Force HQ – East (SFHQ-E) cleared the road patch between Kalmunai and Uhana, Malwatte affected by torrential rains and thunderstorms. (Colombo Gazette)

1 of 7
colombogazette.com - Troops assist students affected by floods in Puttalam